Sons of Anarchy
I've really got egg on my face with Sons of Anarchy. Kurt Sutter followed up a great first year with a second season that was, and remains, one of the finest stories I've ever been told. Convinced it was only a matter of time before Sons usurped Deadwood in the television pantheon, I bugged all my friends to watch it. Then, season three. All the narrative momentum and tension of season two?  Gone.  The colorful supporting cast the past two years had built up?  Relegated to the background. And in the place of those things I loved, I was given a needlessly convoluted plot, played out largely by characters who had never been referenced before and have not been referenced since.  A strong opening and closing gave me some flicker of hope, though, even if it was clear they were doing an Atlas-scale job in holding up the season’s soft middle. Season four also gave me hope: the show was back to its roots, on familiar territory and using characters I was connected to, as opposed to a sea of strangers that gave me zero reason to take an interest in them.  But even as the season’s narrative tension twisted, tight as a rope, I had a gnawing in the back of my brain: a sick but persistent feeling that Kurt Sutter would find some way to fuck this up. Then, the finale. All that narrative tension was undercut, leaving viewers with a serious case of blue balls.  That inevitable showdown, the one that had been built up all season long, the one to which we had been inexorably led, just plain didn’t happen.  And, even worse, it didn’t happen because of an arbitrary plot complication introduced only in the episode before. I’m told season five was a return to form, sort of.  I’m sure I’ll watch it all once it becomes available on Netflix.  But there’s your evidence of its fallen status right there: while it used to be a show around which I’d schedule my dates, Sons of Anarchy has now become something I won’t even bother pirating.
(Paul Krueger)

2 Broke Girls
2 Broke Girls was born with most of its flaws already in place. It was fair, however, for audiences to believe that the bold racism and half-drawn characters would fade with time. Rarely do sitcoms start with their best foot forward; it often takes a while for a show to find its voice. Unfortunately, it turned out that showrunner Michael Patrick King knew exactly what he was saying. And it was mostly a lot of cliches about Asians, European men and old black dudes. Things that appeared to be seeds for greater material never bloomed. For instance, the overuse of sexual terms (namely vagina) would seem to insist on future frank discussions of sex, such as in King's former show Sex and the City. Instead, the characters just kept on saying "vagina" as if that alone was worth a laugh. 2 Broke Girls didn't start off great as much as it did promising: it debuted the same year as New Girl and Girls, and their titular connections placed them in many of the same conversations. But whereas New Girl, the most comparable as it has to live within network standards, grew into one of the best shows on TV, 2 Broke Girls has devolved to not just bad, but offensively so.
(Josh Oakley)

Dancing Echoes/Dead Sounds by Codeseven
This is one of those cases where the things that make the first song of an album great are the same things that make the rest of the album a chore to get through. After a short ambient intro the album gets things started on the right foot with “All The Best Dreams”, a spacious synth driven song that, as the name suggests, sounds like it’s built out of pleasant daydreams and stardust. It’s a beautiful cross between mid 2000’s emo and The Cure circa Disintegration. The song glides along at a soothing pace until it explodes in the soaring and rhythmically unbalanced chorus. It’s a moment where the real intrudes upon the dream, where flight turns to falling just as your alarm kicks in. The rest of the album however, is more similar to the sensation of being forced to do math while sleep deprived. The dreamy atmosphere keeps any of the remaining songs from grabbing your attention, and the album slowly devolves into flavorless mush. The band attempts to harness the power it used on the chorus again in the closing track, but by that point even volume has become soporific.
(IC) Left Hand Path by Entombed
Under normal circumstances the body of this seminal Swedish Death Metal album would never find itself anywhere near this list. However, when you open your record with a song as extraordinary as “Left Hand Path” circumstances can never truly be normal. The title track is a master class in momentum and aggression. It starts at a blistering pace and gradually drops the tempo with each new section, ensuring maximum moshing potential, before ratcheting up the speed once more for a flurry of disorienting guitar solos. Most metal bands would have been content to end the song here, and the song does seem to conclude, until an eerie keyboard melody floats in as the feedback fades away. From here the song transcends just formal perfection and reaches a new level of majestic grandeur. The thick and crunchy guitars that were used to bludgeon the listener in the first half take on a more melodic bent, transforming the song into a funeral march through molten sludge. The rest of the album is good, sometimes great even, but after that opening salvo, it feels like the point’s already been made.
(IC) 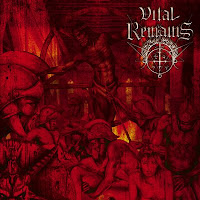 Dechristianize by Vital Remains
Like the above example, here’s another opening title track on a death metal record that makes the rest of the record moot. The difference with Dechristianize is that the gulf between the good and the bad is significantly wider. The majority of this record is the sort of monotonous hammering that makes people like me grow out of death metal. No subtlety, no surprises, no purpose other than brutality for brutality’s sake. It’s an endless 70-minute stream of blast beats, simplistic and repetitive song structures hiding behind chromaticism and the implied chaos of “heaviness”. It’s a flat line, where it appears that nothing is happening because it’s operating at full tilt at all times. The title track starts out this way, although it fairs a bit better due to coming before the rest of the tedium, when at about two and half minutes in, things change. The pace slows, and the grind is replaced with a neoclassical sweeping passage. Immediately afterwards the band uses the most valuable tool in the metal genre: harmonized guitars. Suddenly the song transforms from rote death metal to something bigger in scope. In film terms, they successfully transitioned from Bourne-style handheld chaos to a Lord of the Rings helicopter shot and MADE IT WORK. Soon after the band jumps back into the bedlam, but carry the sense of purpose and stakes with them. It’s such a magical moment that is so out of place on the album that you have to wonder how on earth they even came up with it.
(IC) 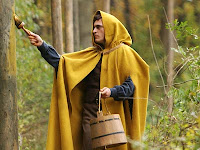 The Village
M. Night Shyamalan was not a bad director. Key word: “was”. He had some great successes with The Sixth Sense, Unbreakable, and Signs, with the former earning him some attention from the Academy Awards. However, his streak of good films had to come to an end at some point, and ever since his mediocre film The Village, Shyamalan has not been able to make anything worthwhile. Now, that is not to say that The Village is a horrible film, because the beginning is actually quite good. But once the multiple twists are unveiled throughout the latter two-thirds of the movie, it ultimately unravels into an abomination of cinema. What really works about The Village is the concept of an isolated 19th century village that is plagued by demonic creatures that terrorize those that dare enter the forest they inhabit. The film starts out very promising, and that is in part due to Shyamalan’s talent for building up suspense and terror. He knows when to have a window rattle, or a twig snap, and make his audience jump and be afraid of what is to come. His direction in the first third of the movie is spot on, creating this sort of period piece mixed ever so carefully with fantasy and horror. He keeps his creatures hidden, or obscured, so that all we see are the creatures’ red-cloaks. The less we see, the more menacing these creatures are. We, as an audience, don’t know what they are capable of; all we know is that the villagers are scared of them. I would have liked to have seen these creatures really become a menace and show themselves. Shyamalan had a pretty intense horror film going for him, and then he had to screw it up with some half-assed twists that were too outrageous to keep this seemingly neat premise afloat. Shyamalan loses his credibility as a director and a storyteller with this film. What starts out as an amazing horror movie concept, turns into a laughably unbearable festival of twists. If he had the first twist the film wouldn’t be nearly as bad, but for him to have two makes it all the less impactful. I sincerely hope Shyamalan makes better films in the future, but After Earth isn’t giving me too much hope.
(Mike Horky)