Panic Moonwalking: How New Girl Turned Into the Best Sitcom Currently On TV 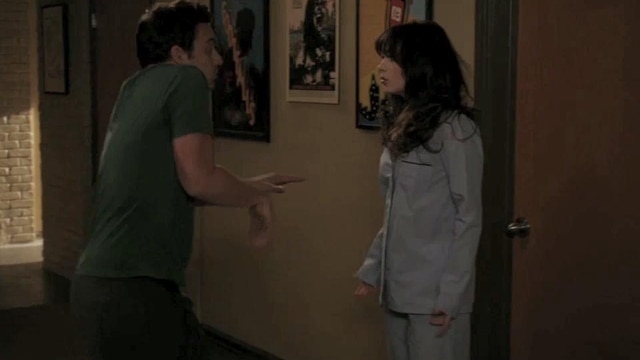 A preface for this seemingly outlandish headline: Louie is not currently on TV. I don't care for Girls or Community as much as most (though I think both are solid and can turn out great episodes). While Parks & Rec is still fantastic, it hasn't lived up to its consistent genius potential since season 3. But this article is not intended to attack the quality of very good shows. Rather, here I will extol the virtues of a program that began as a lumpy mess and shaped into an experience that is widely entertaining and, more than that, mature.

While the characters may act immature and childish, they do so within the confines of a universe that punishes, or at least acknowledges their flaws. This is perhaps the greatest difference between the pilot episode of the show and its most recent outing, "Table 34". Specifically, the world that New Girl existed in began as a world defined by Zooey Deschanel's character Jess. Now, the show has allowed voices to examine the ridiculousness of what was once a simple Manic Pixie Dream Girl. By turning its world inward, it has been able to keep its main character's childlike qualities, while commenting on them, and adding voices to balance the tone out.

This is not to say that Jess is the same person she was on day one. Through deft writing and Deschanel's performance, Jess has gained a depth that would seem unheard of in the first half of the first season. By fleshing out her backstory, her moods and her intelligence, the show has  lost the little girl in a big girl's body (remember when she was afraid to say the word "penis"?). That version of Jess seems incomprehensible to the version that told her boyfriend the truth about an illicit kiss. She may have followed up this mature honesty with "22" by Taylor Swift, but that is a fantastic song, and it still works perfectly within the confines of my (and the show's) argument.

The reason Jess picked this song to listen to, out of all the many great T Swift songs pertaining to break-ups, is its central idea: Jess was feeling 22. That weakness uprooted her from the stability of age, and placed her in a younger mindset, one much less sure of itself. It was a great song choice because it didn't contain the vitriol of "We Are Never Ever Getting Back Together" or the blame of "I Knew You Were Trouble". It was, again, an inward look at herself. She made the mistake, and had to pay for the consequences. As thrilling as the kiss initially was, these are real people (within the show, of course. but a man can dream). Their actions hurt people.

The other major boost the show has had over the past season or so was its wise reliance on the supporting cast. The back half of season one saw Schmidt receive a king's ransom of hilarious plots and one-liners. Also, importantly, it developed him. Not completely, and not unrealistically. He is still after sex, and pulls off idiotic stunts. But it's impossible to deny the heart that was established in the season one finale has disappeared. While Winston and CeCe continue to be largely underserved (though CeCe's pronunciation of "pen" a couple of episodes back may have been the hardest I've laughed all season), they are still gaining shadings, which will be important going forward.

And then, of course, there's Nick, played with absolute perfection by Jake Johnson. Even more so than Jess, Nick has had a complete overhaul of self. He is still the sad-sack he's been since the start of the show, but now the writers know exactly how to play to Johnson's sensibilities, and do so in pretty much every scene. More than that, there is a deep sadness to his, well, sadness. The show isn't concerned with dealing with the realities of depression (nor should it be). But it pretty much nails the fatal combination of laziness, hopelessness and loneliness that has cloistered Nick within the loft.

The humor is there, but as with every argument I make for every sitcom I adore, that of course is not enough. If you don't find New Girl funny, I cannot very much tell you that you are incorrect. So we come back to what the show has done with these (extremely funny) characters: It has examined them. Not to the extent that Mad Men has looked at Don or Peggy. Not even in the same way that It's Always Sunny In Philadelphia analyzed its leads last seasons. This is not a meta exercise like Community or extreme character transformation like Breaking Bad. Much more simple than that, it is people trying to figure out themselves and the people they've populated their lives with.

Jess, as stated above, made a mistake, fessed up, and payed the price. I was worried, for a split second, that when Nick confessed his fault to Jess' boyfriend, it would turn out that she had told him something else, and Nick ruined it. That New Girl did not pull out this basic sitcom card is what defines the show. Jess is an adult, and while she is an adult that makes mistakes, and listens to Taylor Swift, and plays True American, she has a grounding in reality. She is not yet sure of all of her loose ends, nor will she ever be. Even her parents aren't. But, as we saw earlier in the season, she knows more than the young hipsters down the hall. She knows more than she did when she was 22. This acknowledgement that we are a collection of our past mistakes is not one sitcoms often make. The acknowledgment that we are still making those mistakes and always will, is one sitcoms almost never touch.

Nick can be defined within these terms as well, though he may be closer to his 22-year-old self than he would like to admit. He feels bad for what he has done, but his entire life has not shifted (yet). Perhaps the most exciting thing about New Girl going forward is how much room it has to expand. Winston is the only character who has a job he loves, and none of the characters have settled down for good.

And even if they did. Even if, by the end of the season everyone is coupled off, and Nick's book is being published and Jess has found solace teaching adults and everything seems perfect, we will know the show knows it cannot stay this way. For even when we find the job and the partner of our dreams, we still have plenty of mistakes to commit. And New Girl fully understands that each of those mistakes, everything that we panic moonwalk away from, is something that makes who we will be tomorrow different than who we are today.
Posted by Wine and Pop at 12:00 AM