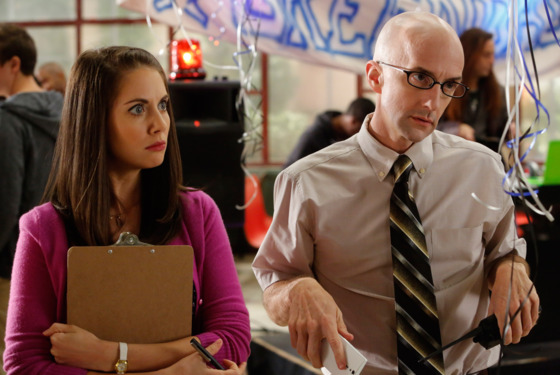 Overall, the first half of Community’s fourth season has been fairly lackluster, with only a few redeeming gems sprinkled throughout. Thursday night’s episode of Community, however, was a true return to form; the humor was spot on and nearly every storyline was well-crafted and engaging. “Economics of Marine Biology” was not only extremely entertaining, but also proof that Community can still be great under the right conditions.

Right off the bat, the Dean gave the study group a clearly defined goal: recruit a wealthy student, also known as a “whale”, to enroll in Greendale and bestow his fortune upon the school. Unfortunately for the Dean, not everyone could help out, so he was left with the aid of Annie and Britta. In their desperate attempts to recruit Archie, the “whale”, the three were forced to find out just how much they were willing to sell-out in order to achieve their goal. Unsurprisingly, Britta broke first, refusing to clean Archie’s shoes with her scarf. Annie and the Dean, on the other hand, went the distance, stooping as low as to hire strippers. Worst of all, they even let Archie claim Magnitude’s signature catchphrase, “Pop pop!”, for himself.  Although Archie agreed to enroll as a result, the Dean and Annie eventually realized they had gone too far and ultimately resolved to fix things. Fortunately for them, when the two finally managed to stand up to Archie, he respected their sternness and remained committed to Greendale. Well crafted and full of humor, this A plot was a strong story that gave the Dean a chance to shine alongside Britta and Annie and set the successful tone of the whole episode.

Meanwhile, Jeff spent some quality time with Pierce. Throughout this season, Jeff has been nearing closer and closer to the end of his series-long journey from jerk to nice guy. This was particularly evident in Thursday’s episode as he also volunteered to help the study group help Greendale. Although he claimed it was because it would allow him to get away from Pierce, it was quite obviously simply because he wanted to help out his friends; he ended spending most of the episode with Pierce in order to secure the success of his friends’ mission. It was this selfless decision that separated him from Annie, Britta and the Dean and allowed us to spend some quality time with Pierce for once. Through his time with Pierce, Jeff even came to slightly appreciate Pierce as a friend. It was a huge step for a character that has very often led the charge on the anti-Pierce sentiments within the study group. If there’s one thing this season has done particularly well, it’s been the handling of Jeff’s character arc coming to a close.

Troy and Shirley, on the other hand, were unable to help the Dean at all and instead were forced to attend their Physical Education Education class (a class that teaches its students how to teach Physical Education). Originally believing the class to be just another gym class, Troy went into the experience expecting to dominate; he explained to Shirley that gym was a class about the survival of the fittest and that he would not pick Shirley to be on his team if the opportunity arose. Unfortunately for Troy, the class was not what he expected and Shirley far surpassed him in skill. Just as Troy was about to give up completely, Shirley enlisted the help of Chang (a small but well-executed use of Chang) in order to teach Troy how to teach. In the end, everything worked out and the audience was given a good deal of humor and a well-crafted storyline that used both of its characters well.

The only storyline that confused me slightly was Abed’s. When the Dean claimed that there would be no “Delta Cube” fraternity at Greendale, Abed stormed off and started a fraternity named just that. This defiance-for-the-sake-of-defiance decision seemed out of character for Abed and sounds more like something that Britta would have done. Despite this, the storyline was appropriately kept to a minimum and well-played for laughs when it was present. It did make me wonder, though, if the writers could not find a good place for Abed within the episode like they were able to with all the other characters.

It’s also worth mentioning the bit at the very end. After a hilarious “Let’s Potato Chips” commercial (setup by a great running joke referencing back to one of Leonard’s old food reviews), we saw Britta and Troy in bed together. It was definitely funny, but it also reminded us that Britta and Troy were still dating. After the past few episodes, I had almost completely forgotten about that relationship. It ultimately made me wonder where exactly the writers are taking this relationship, if anywhere.

With nearly every character given a strong storyline, nearly every storyline sharply executed and the humor spot on throughout, this episode was the best of the season thus far. Community has always been a show of inconsistent quality, and this episode gave hope that this final season may end up being like all the rest before it. If the show continues to give at least a few more episodes this good this season, then the Community we know and love will have surely returned.

Nico Danilovich is a television enthusiast and amateur filmmaker. His work can be seen at: www.youtube.com/lazyneighbors
Posted by Wine and Pop at 4:25 PM