I Am Ted Mosby; At Least I Hope So 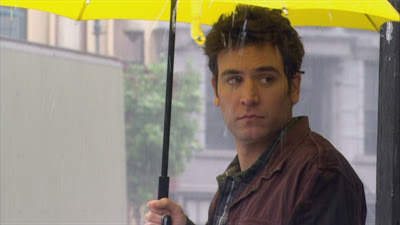 (I would suggest, for fans of the show who have not yet seen this week’s episode, to stop here and watch before reading. I don’t generally care about spoilers, and this isn’t even really a spoiler per se, but it is best to face the episode knowing little.)

Much of this week’s How I Met Your Mother is merely a solid episode. The A-story concerns Barney attempting to convince Ted to go see Robots Vs. Wrestlers with him. The future versions of both men, from 20 years down the line, join them at MacLaren’s, and help Barney to persuade Ted. The story gets more complicated, as “20 hours from now Ted” and “20 minutes from now Barney” join, and it’s all well done, though exceedingly strange. This is a show grounded at least somewhat in reality, and the supposed realness of the “future versions” feels a bit off. Then, Ted notices that Coat Check Girl (from one of the first episodes, “Okay Awesome”) has entered the bar. He goes to talk to her, but then two future versions of the girl pull Ted aside and remind him that all of his relationships have failed, so this one will too.

The camera lingers on a wide shot of Ted for much too long, and I mean that as a heavy compliment. It’s the first real hint that this episode has more on its mind than a dance contest between Marshall and Robin. After the lingering shot, Barney reveals to Ted that this is all in his mind, and it happened years ago, and nobody wanted to go to Robot Vs. Wrestlers with him. This kind of reversal has been done on the show before, and it’s done well here, but what follows is a masterpiece of a scene.


That scene involves Ted running through the streets to the apartment of the woman he will meet in 45 days, and telling her he wishes those days could start right now. It is, of course, a fantasy, but it’s a gorgeous one. There is no laugh track, and the music provides context for one of Ted Mosby’s best speeches in the history of the show. Then the fantasy ends, and Ted walks out into the night.

We know that (in just 45 days), Ted Mosby will meet his future wife, and be happy. He will no longer be alone, and so sympathy for him may seem out of place. But the Ted of that night has no idea that this girl of his dreams stands only 45 days away from him. And that’s the episode’s point: the fact that we cannot know our future, or the right decisions to make can be thrilling. But really, for the lonely and the unemployed, and honestly, for everyone, it’s a horrifying nightmare.

I am a perpetually single man in his early twenties. I say this not to beg for pity, but to provide some context for why I think this was the greatest television moment of the year so far. There are countless nights (well, if you are capable of adding up every single night, than I suppose it is countable) where I wish to be given a glimpse of what my future may be. I’m a romantic, much like Ted, and lest you think that term implies pretentiousness or some other noxious belief, it is not something I hold with pride. Being a romantic sucks, because the world was not built for romantics. It was intended for those that know that grand romantic gestures come off as creepy more often than not, and the idea of “soul mates” is as constructed as anything shown in pornography or MTV Cribs.

This is because I was raised on television. More importantly, I was raised on Scrubs and The Office and How I Met Your Mother, and other shows that put on emphasis on true love and romanticism and all that poison that infects vulnerable youth like me. Chuck Klosterman has a brilliant essay where he discusses this sort of thing, but he has a more cynical attitude. He had, at the time of writing that, about a decade on me as I am now, so my attitude may morph into his. But as I am, 21, sitting in my apartment attempting to finish this so I can go drink with my friends across town, I still cling to the belief that the mystical “her” may be sitting next to me on the bus. She may be standing behind me at the liquor store, or serve me my food the next time I eat at a restaurant, or attend the same concert I go to this summer. Or, as Ted’s misguided love for Robin that once permeated, perhaps I’ve already met her. Where or when I meet her isn’t the issue for me (yet). It’s the if. And I still believe in the that if.

The final scene of this week’s How I Met Your Mother is at once pessimistic and optimistic. We know, as previously stated, that his fantasy at least partially comes true. I have no such comfort. I am, again, the version of Ted that staggers out into the night, to an unknown tomorrow. We cannot speak to the version of us that will exist in 20 years. That is a good thing, mind you, but it’s hard to picture it as such. We (21-year-old virgins who have never dated a girl or held hands outside of a prayer circle) are often told that it’ll happen some day, and it’s coming sooner than you think, and any number of empty platitudes that your close friends say to be comforting. But for Ted on that night, and me on this one, it’s a cold comfort.

I do insist that I remain a romantic optimist at heart. But at least the pessimists know what’s coming. They can be surprised by the good things, and understand the bad things. Romantic optimists are consistently shut down (mostly by their/my own fault; I do not pretend there is some force or person to blame). The effectiveness of How I Met Your Mother’s beating heart stems from its understanding of supposed eventuality versus reality, which is much less fun than Robots Vs. Wrestlers. This is a story where the ending was told before the beginning, and yet it manages to surprise, and to elicit tears out of nowhere, as it did this week.

It can do this because the show understands that what we want to happen and what will happen are not even in the same ballpark. Ted has chased after many women, and many dreams, and he has arrived at job he did not expect, and will find a wife after he has all but given up. I do hope I don’t arrive at that point. But if I find myself at his age, still alone and left wanting, I will have this tremendous episode of television to turn to, and it will give me hope. And that hope, in the destined, and the inevitable, may not be healthy or good. But as I throw on a couple jackets and think about what kind of shitty beer I’ll be drinking tonight and step out into an unfairly cold Chicago night, that hope is unmistakably who I am, and what I have chosen to believe in. And I hope it all works out. Even if it doesn’t, I hope it does.
Posted by Wine and Pop at 8:35 PM

Email ThisBlogThis!Share to TwitterShare to FacebookShare to Pinterest
Labels: How I Met Your Mother, Ted Mosby