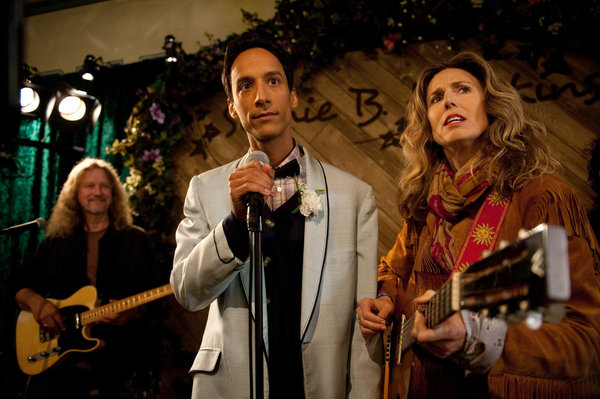 With this latest episode of Community, we’re officially more than halfway through the final season of this beloved show. In the beginning of the season, the general consensus among people seemed to be that the show was lacking severely without the magical touch of Dan Harmon. However, as time goes on, I’m becoming more and more convinced that this simply isn’t true. Admittedly, I was disappointed towards the beginning of the season as the writers repeatedly took us out of Greendale to tell stories that strove to be impressively high concept, but instead felt haphazard and poorly structured. However, recent episodes have smartly returned to Greendale to tell generally solid storylines, and tonight’s “Herstory of Dance” continued this trend. Each of the main characters was properly utilized. All of the storylines were strong and connected enough by a single event to not feel scatter-brained. But most importantly, this episode told a storyline I never thought I would see Community tell and it did a great job doing so.

Did you ever think you would see a romantic storyline for Abed? Well, neither did I. And while you may think that the writers only chose to tell such a storyline because they’re running out of ideas, I don’t really think it matters whether or not that is true. In the end, the writers did a great job crafting a compelling and convincing romance for Abed, effectively nullifying any critiques of the basic concept.

It all began because Abed was seeking to grow as a person, an obvious theme for the show’s final season. Unfortunately, Annie and Shirley ended up exploiting his desire by both trying to find the perfect girl for him and turning it into a competition. Easily pressured by his friends, Abed ended up bringing two dates to a dance and fell back into his old habit of acting out sitcom tropes. In the midst of his self-indulgent hijinks, Abed met a girl with whom he connected quite well; she admired his attempts to act out classic sitcom tropes, shared his knowledge of pop culture and assisted him in his pursuits. It was a simple and effective “boy meets girl, girl likes boy, boy likes girl but does not realize it yet” setup and the payoff was great. In the end, Abed realized that this girl was the girl for him and (quite awkwardly) made a grand gesture to get her back, cleverly harkening back to their discussion from earlier in the night. Ultimately, this storyline introduced a side to Abed nearly unseen before and thus provided his character with a genuine sense of growth. Although not as emotionally raw as Jeff’s confrontation of his dad, this was definitely another standout storyline that will spring to mind whenever one thinks positively of season 4.

The other prominent storyline of the episode concerned Jeff, Britta and, surprisingly, Pierce. After making a foolish mistake, Britta attempted to cover her ass by lying herself into a corner. Jeff, once again acting as the jerk of the group, teased her relentlessly for it and gleefully watched as she inched closer and closer to failure. It was another manifestation of the classic Jeff-is-a-jerk storyline that is so prominent throughout the series, but what made this particular one unique was the unexpected role Pierce played in it. He uncharacteristically fulfilled the role of the “wise man” in the episode by encouraging Britta to stand up for herself (albeit in a roundabout way) and ultimately saved her from Jeff’s ridicule. Not only that, but he even managed to get through to Jeff and convinced him to be less harsh on Britta. It was touching and fresh, both being satisfactory qualities for any B-story.

Meanwhile, the rest of the members of the study group were all engaged in their own adventures. Annie and Shirley, mostly serving as set up for Abed’s storyline, engaged each other in a petty competition. Troy, meanwhile, spent the episode trying to convince both Abed and himself that he could still have fun without Abed, even if that meant helping Britta with her boring chores. Other minor character storylines included the increasingly hilarious attempts of the Dean to seduce Jeff and a great bit wherein Chang hammered away at the notion that he had Changnesia. All of these threads were small and simple, but provided the episode with a good amount of humor without going overboard.

My theory is that the beginning of this season was so rough because the writers felt that they had something to prove with Dan Harmon gone. Now that they no longer feel the need to prove themselves, they’re returning to Greendale and telling classic Community storylines. As with any season of the show, not everything they’re doing is great, but enough of it is smart, funny and engaging. Although the puppet concept of the next episode is potentially problematic, I’m hopeful that this season will continue its recent trend of providing straightforward and quality episodes. Because this is Community, it’s inevitably going to have to get crazy sooner or later, but I think the writers would be best advised to save that until what will hopefully be an epic conclusion.

Nico Danilovich is an amateur filmmaker and television enthusiast. His work can be seen at www.youtube.com/thelazyneighbors
Posted by Wine and Pop at 11:07 AM