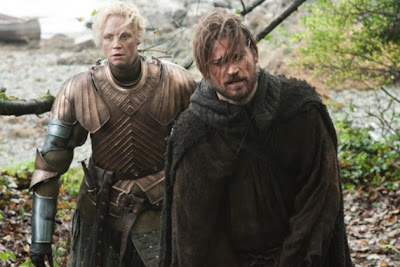 There’s a cruel irony at work in the fates of the Stark children.  As the series started, Sansa dreamed of being a princess in King’s Landing.  Now she’s trapped there, a political prisoner and a lady in name only.  Robb was eager to one day inherit Winterfell, and had to do so long before he wanted to.  And Arya yearned to run away from her noble responsibilities; now she’s ranging the countryside in rags, scooped up by the notorious Brotherhood Without Banners.  She might have walked out of the situation a free girl, but the Hound had to show up and ruin everything.  House Stark really can’t catch a break, can it?

If Tyrion has been this show’s mind, Arya’s been its heart.  Other characters are players in the game of thrones; Arya’s just caught in the middle of it, doing her best to survive bouncing from the clutches of one faction to another’s.  Ros the whore is probably supposed to be the common man’s surrogate to the world, but I contend that Arya fits the bill much better.  More than anyone else on this show, Arya has no control over her destiny.  Even Sansa, caged bird she is, has Littlefinger looking over her shoulder.

Of course, if the man who has your back is Littlefinger, you might be better off on your own.

Fortunately, Sansa has other guardian angels.  Shae appears, largely to provide an excuse for a Tyrion scene, and House Tyrell has its own vested interest in her.  Lady Olenna’s scene was great; with such a dynamic character being played by an actress so great as Diana Rigg, how could it not be?  But the fact that Sophie Turner can hold her own against that caliber of talent and material speaks volumes of her acting abilities.  It’s funny to think that back in season one, she was one of the most irritating characters; now, she’s one of the most watchable.

I wish I could say the same of Bran and company.  The producers are playing fast and loose with his storyline; if they’d followed the books exactly, the Reed children would have been introduced early last year, though their entrance now works.  It’ll be nice to give Bran someone more cerebral to talk to, but honestly the plot’s setting up to become this year’s version of Qartheen politics.  Will it give a talented bunch of actors something to do this year?  Absolutely.  But will it have a part to play in the show’s larger arc?  Unless the producers play very fast and very loose this season, probably not.

But that’s fine enough, because Jaime and Brienne bring more than enough forward momentum with them to make it up.  Seeing these two bounce off each other is a delight, since Brienne is the first person since Ned Stark that Jaime can’t just shrug off with a sneer and a quip.  And just as things boiled over with Ned in the form of a sword fight, Jaime finally gets to clash blades with another equal.  Except that in addition to the general ignominy of imprisonment, the poor Kingslayer gets the very specific ignominy of losing to a woman at his own game, then getting recaptured by the North.  Womp womp.  For a brief moment he gets to be a dashing swordsman again, but then he has to learn the same lesson as the Stark children: you don’t get to be what you want.