Game of Thrones: “Walk of Punishment” 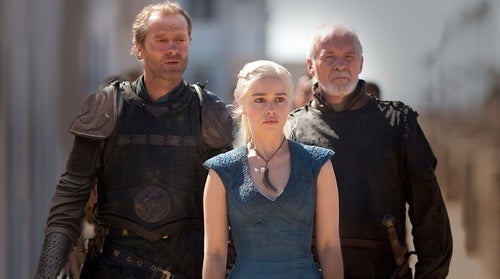 This episode bears a fitting title: at the end of it, only Daenerys really seems poised to better her lot in life, while everyone else has a serious case of the Mondays.  I watched it with a kind of breathless glee; having spent the past two weeks telling my unsullied (heh) friends that two episodes of set-up were necessary for what was coming, it was nice that the show made good on my promises almost immediately.

But “Walk of Punishment” also works nicely as a thesis statement for this season in general.  To survive long enough to get this far, the current cast of characters had to pile up various sins here or there in seasons one and two.  Now, those sins have begun paying back dividends, and it won’t stop here.  This year will see the characters we know pushed to dark, terrible places, and almost all of them of their own making.  And that’s the essence of great storytelling.  It’s not “This happened, and then this happened.”  It’s “I did this, and it caused this, so I had to do this...”  Those chains of causality have begun to pull tighter, and the writing team does an excellent job of conveying that march towards the inevitable.

A big part of that inevitable feeling comes from the grimness that’s settled over Robb Stark’s camp.  There’s a funeral going on, sure, but it’s worse than that.  The war’s going badly, and Robb’s minions are proving almost as problematic as the Lannisters.  Tonight finally introduces the remaining members of Catelyn’s family: Blackfish, who’s awesome, and Edmure, who sucks.  And Edmure especially sucks because his efforts to win himself a little street cred have cost the North a major strategic advantage, and it takes him about three minutes of having it explained to him step-by-step before he even begins to realize he might have fucked up.  Robb’s one of the few players looking at the whole board, and even he has blind spots.

Daenerys forms an interesting contrast.  She’s always been a major force in the show’s narrative, but her dealings with the slavers of Astapor are the first time in the show she’s taking initiative for herself.  Season one saw her barely surviving the death of her badass husband, and season two brought us to “Where are my dragons?!”, The Phrase That Launched A Thousand Memes.  Barristan is a welcome addition to break up Jorah’s usual “(insert cryptic advice here), khaleesi” patter, and while the two old men do everything short of whipping them out and reaching for a tape measure, they agree on one thing: an unstoppable brigade of ball-less death machines isn’t worth a dragon.  They’re right, but it’s not their decision to make.  Come next week, Daenerys will make her first true move to reclaim the Iron Throne, and with that come chains.

The Unsullied have no balls, but you know who does?  Podrick motherfucking Payne.  His deflowering is perhaps the only thing Tyrion’s done since arriving in King’s Landing that hasn’t blown up in his face, and even then it didn’t go exactly to plan.  The “suitable” position Tywin promised in the premiere is Littlefinger’s old job, Master of Coin, a job Tyrion knows he has no great gift for.  And to his horror, he discovers Littlefinger was the same way, but very good at disguising it.  It’s a slap on the wrist, karmically, but it’s a fate not nearly commensurate to the services he’s rendered.

But even before he knows what’s coming, he gives off shades of his usual defiant streak: while Cersei takes pains to sit as near Tywin as possible in that great small council scene, Tyrion places himself at the table’s end, declaring himself Tywin’s counterbalance and equal.  Cersei is reliant on her father for power, but Tyrion is his own man.

Despite how much cooler he is than his sister, Jaime still makes the same mistakes she does.  He freely throws Tywin’s weight around, and for his efforts finds himself disarmed.  I saved this subplot to discuss for last because of all the levels on which it gets things right.  We start off with a taste of the Jaime-Brienne bickering from last week, though it quickly takes a turn for the unsettling when he points out she’s a woman and their captors aren’t chivalrous types.  That unrelenting air of something being off never leaves, and the writing plays with tension levels just the right amount throughout.  Just as Cersei defines herself by the men in her life, Jaime defined himself by his combat skill.  Cersei's men won't be there forever, and Jaime's skill has proved distressingly impermanent.  And so punished by the universe, the question becomes: will they be the same people without those things in their lives?  Jaime will have to make his choice very soon.