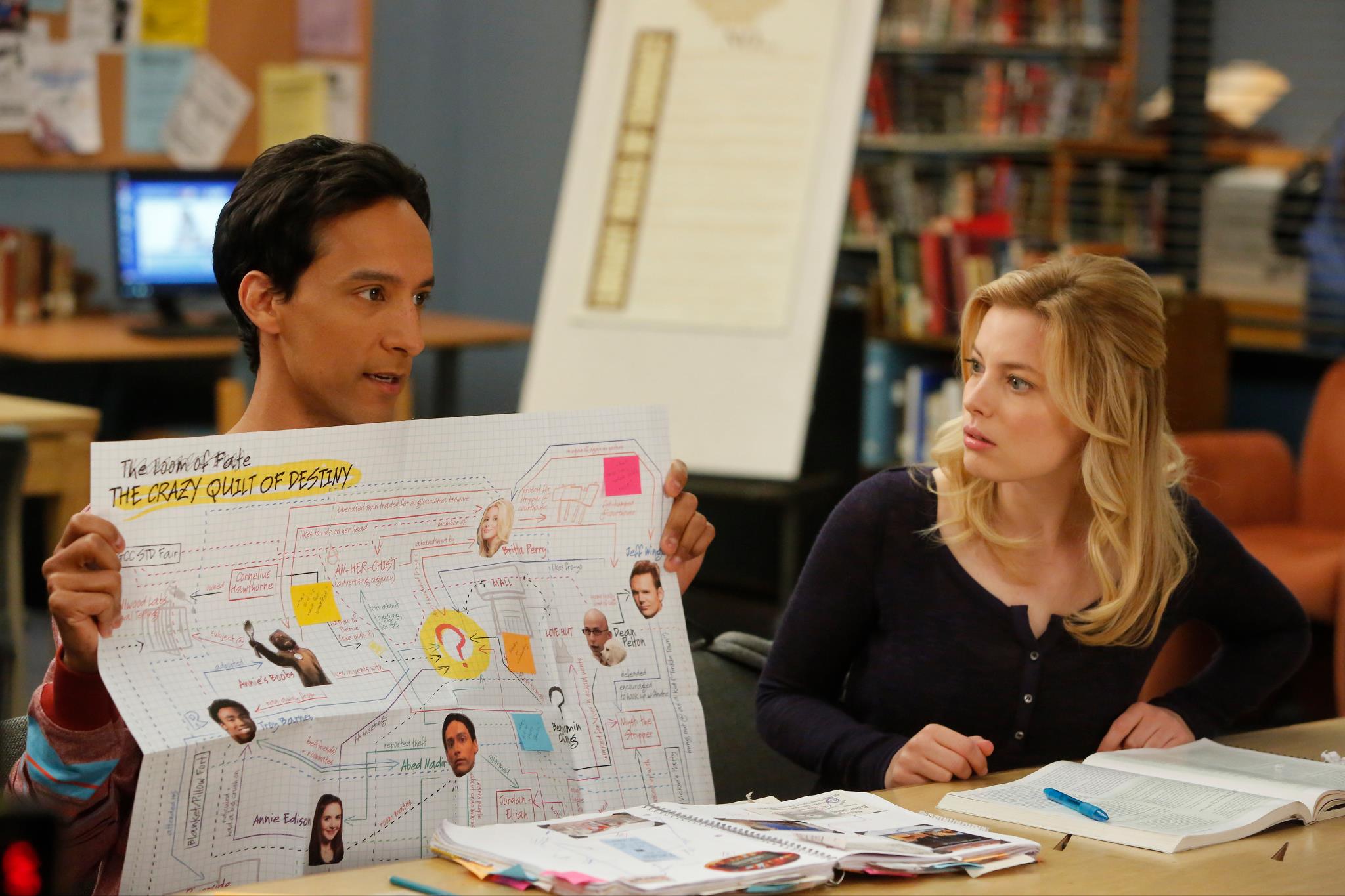 After last week’s poignant “Basic Human Anatomy” and the general trend of quality episodes in the second half of this season, “Heroic Origins” was quite the disappointment. “Heroic Origins” took what could have potentially been a good episode and steered it in a direction that ultimately contradicted the thematic premise of the show as a whole and ruined one of the few arcs this season had going. On the other hand, the unique style and clever humor of this episode kept things interesting throughout. Ultimately, however, the negatives of this episode outweighed the positives and, honestly, I’d rather just forget the whole thing altogether.

The basic premise of this episode was that instead of studying actual history, Abed chose to study the history of the study group. He likened them to a team of superheroes and wanted to establish their origin stories. It was a cute idea that made sense for Abed’s character, but the writers took it in the completely wrong direction.

Shirley and Abed went to the same mall on the same day; Troy and Annie apparently ruined each other’s high school lives; Britta thanked Jeff for being a hero for women’s rights; Jeff encouraged a stripper to sleep with a married man who would turn out to be Shirley’s husband; Abed inadvertently gave Andre the opportunity to cheat on Shirley; Shirley inadvertently caused Abed to have to go to therapy; Abed got Annie busted for her addiction; and everyone loved yogurt.

The complexity of the backstories, the comic book-reminiscent style and certain jokes (particularly Shirley awakening in the Dean his future cross-dressing tendencies) were all interesting. But ultimately, by establishing a complex origin story for the study group wherein their lives were all intertwined, the writers created a mythology for the show that goes against what the show is about.

Another problematic element in this episode was the handling of Chang’s storyline. All season long the writers have been teasing Chang’s elaborate plot for revenge. It turned out his master plan was to not deliver the lease renewal for Greendale. Effective? Yes. Dramatic? No. Even worse was the way in which he was tied into the conclusion of the episode. Abed realized that Chang had actually been a part of the study group all along and invited him to get yogurt with the gang. Chang was so touched that he gave up on his plan for revenge and delivered the lease renewal. And just like that, the threat that Community had been teasing all season long dissipated without a trace of drama. Could this have been a touching turn around for a loveable character? Sure, but Chang has always been a caricature and should be used as such—for laughs. It’s hard to care about a “character” who’s been proven to be insane and heartless. Ultimately, this storyline did nothing but rob the season of a potentially dramatic arc.

So, was “Heroic Origins” a funny twenty minutes of television? Yes. But overall, it was a story worth NOT telling. I understand the desire to create a complex backstory for our lovable study group, but it was the wrong decision to make. Community is a show about just that: community. Not destiny. I can only hope that Community will bounce back from this setback and provide a season finale (potentially series finale) that delivers humor and emotion in a way that actually works with the series’ overall themes (which basically amounts to community and friendship). Keep your fingers crossed; “Advanced Introduction to Finality” here we come.

Nico Danilovich is a television enthusiast and amateur filmmaker. His work can be seen at www.youtube.com/TheLazyNeighbors
Posted by Wine and Pop at 5:56 PM