Game of Thrones: “The Climb” 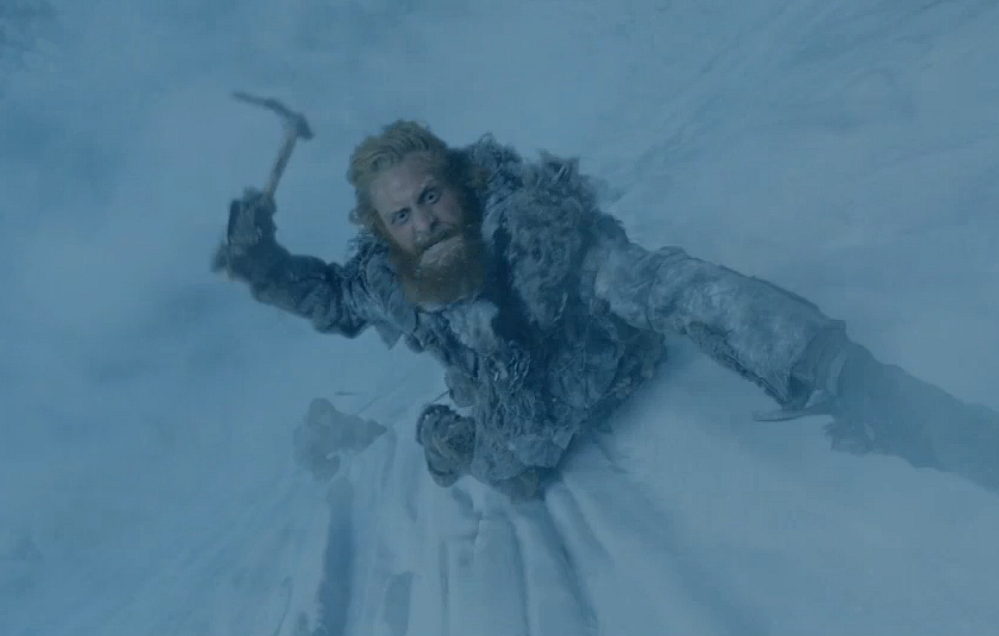 With a show this thematically rich, there are a lot of different ways to watch it. You can see it as a cautionary tale about power, or scorching condemnation of the excesses of nobility, or just as a cool allegory for medieval history, minus the Black Death and plus dragons. And really, Game of Thrones is all those things and more. But a great distillation of what the show’s about lies in the periodic Varys-Littlefinger showdowns. Thanks to the books’ POV structure, none of them exist in the source material, but they’re easily one of the best adaptational choices the producers have made yet.

Varys and Littlefinger are the two best players in the game.  While they bow and scrape when a man like Tywin walks in the door, they both sneer behind his back because they both know the old man doesn’t even realize that he’s their pawn, not the other way around.  And you can make an argument that at any level of the game, people fall into one’s method or the others.  Some players represent order, like Varys: using systems of fealty and blood to engineer and secure one’s place in society.  And others play like Littlefinger, lighting everything around them on fire in hopes that an opportunity will spring from the ashes.  So Varys uses Tyrell-Lannister politics to pull Sansa from Littlefinger’s grasp, and succeeds.  But Littlefinger sets in motion events that will ruin Sansa’s life and ended Ros’, all on his way out the door.  The game goes on, but this round goes to Petyr.

The Brotherhood falls squarely in the Littlefinger camp.  They tell themselves they serve the realm and Rh’llor to help themselves sleep at night, but they sell out one of their own the moment gold hits the table (Petyr’s diatribe about the realm being an agreed-upon lie could also easily describe money--interesting philosophy for a treasurer).  But while the scene gives Arya some great character moments, what it really illuminates is religion in Westeros.  The Seven are the gods of the establishment.  They bring comfort to Sam and Gilly around a campfire, and to the nobles in their castles.  But Rh’llor actually answers prayers, and it was cool to see even Melisandre caught wrong-footed for once.  Especially by her own precious god.

Olenna and Tywin are definitely Varys types.  Their scene, one of the best in the season so far, is an exercise in political speed chess.  The show plays up parallels between them, which make their differences all the more interesting.  Both are savvy and tough as boot leather, but when each is confronted with the skeletons in their Houses’ respective closets, Olenna owns it and hilariously turns it on Tywin, while Tywin closes his ears and eyes to the obvious despite the mountains of proof piled up around him.  He and Sansa should hang out; Loras was practically smacking her in the face with a sack full of glitter and it was still missiles fired, no damage sighted.

Robb’s wedding planning isn’t going much better.  Edmure messed things up, but now he’s being made to pay for Robb’s sins.  Robb’s a cool guy (and quite hot), but it’s pretty damn hard to respect someone who’d throw a valued bannerman under the bus like that.  Funny that Jaime, one of the series’ biggest cynics, would display far more honor this week when he tries once again to save Brienne’s life.  Roose Bolton’s a hard case, though, demonstrating the sort of pragmatism and cruelty of which Littlefinger would definitely approve.  Jaime goes, Brienne stays, and House Bolton hedges its bets by currying favor with both kings at once.  Robb admits that he’s a hopeless player of the game, but even he has no idea how much better his underlings play it than he.

And then, there’s the literal climb of the episode.  Despite being one of this installment’s two namesakes, there’s not really much deep material in this particular subplot to criticize.  In between scenes of the wheelings and dealings in King’s Landing, we cut to Ygritte and Jon playing Ice Climbers as a way to inject some adrenaline into the proceedings.  I’m of two minds on this whole sequence.  The character work and acting was uniformly excellent.  McKenzie “Wooden Eye Guy From Pirates of the Caribbean” Crook makes Orell, an unremarkable book character, a vibrant screen presence, while the producers seem to have heard my pleas from last week’s review and given Rose Leslie great material that doesn’t involve her having to pull a Lena Dunham.  And on top of all that: more Tormund.  Always more Tormund.

But the direction wavered.  Sometimes the effects were good, and sometimes the CGI showed badly, which took me out of the moment.  The climb subplot was a good diversion, but it unwittingly made a case for the power of strong drama.  This week treated us to the visual of a view from seven hundred feet up, as well as near-death by avalanche.  But though the episode ends on that majestic note, the one that stayed with me when the credits rolled were thoughts of a whore’s arrow-ridden corpse and the two men that put her there.