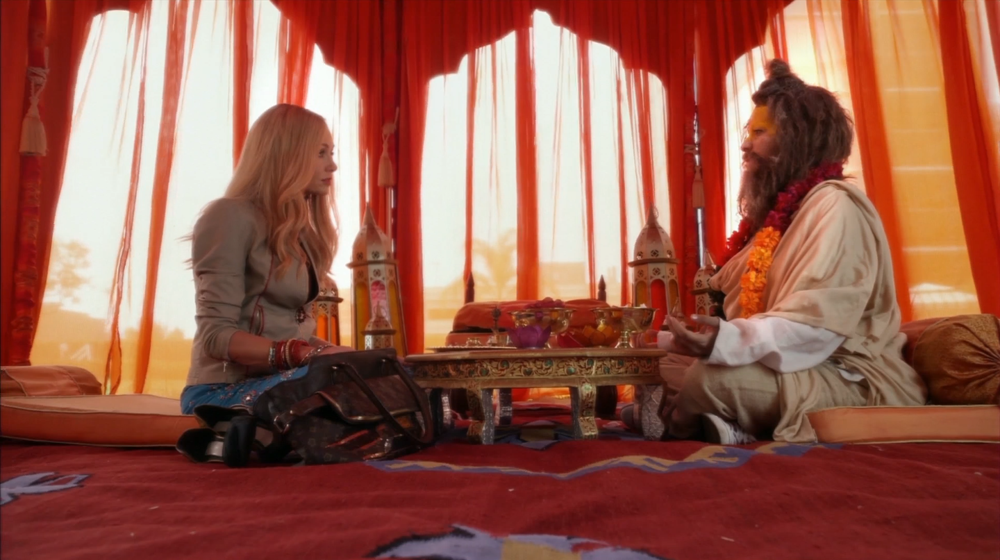 Episodes two and three of season four truly immerse us in the new character-spotlight structure for the first time.  Episode one was from Michael’s perspective, but isn’t most of Arrested?  Here, we see characters like Lindsay and George Sr. stand mostly on their own for the first time.  Unfortunately, while that spotlight exposes new facets of them, it also reveals weaknesses in the characters (particularly George Sr.) that were easy to ignore when they were in supporting roles.

Upfront, Lindsay’s better-served than her father, storywise.  Part of that comes from her own selfishness, and part of that is her close proximity to Tobias, a character so dynamic he wills story into existence with a flutter of his jazz hands.  I wasn’t huge on her trip to India--it indulged in certain lazy stereotypes, then tried to call out Lindsay for expecting them.  It was Hurwitz wanting to simultaneously have and eat his cake, and he didn’t quite sink his teeth in.  The sequence gets revisited a few times to greater comedic returns down the line, but right now we only get one piece of the pie, and unfortunately it’s almost all crust.

George’s wilderness years are the same.  His misinterpretation of Stan Sitwell’s wall plans is humorous, but I don’t remember him ever being that dumb in the original show.  This is a canny manipulator who’s successfully kept his sons at each others’ throats for years, and made his fortune in the development business besides.  The punchline was cute, but not worth undercutting his character.  And while the scheming leads to some great George-Lucille material, it’s not terribly compelling.

The difference comes midway through each episode.  Tobias and Lindsay get caught up in the recession madness--a bit of cultural commentary that has worked in Arrested’s favor.  And a classic bit of obliviousness on their part leads them to a methadone clinic, and from there into the arms of a recovering junkie and a face-blind activist, respectively.  Marky Bark is a classic Arrested Development oddball, from his punny name to his cheerful expression of his disability.  He works well as a reflection Lindsay’s own pretentions to activism, and his ostrich farm slots another piece of the puzzle into place for the overall arc.

George, though...Jeffrey Tambor has always done excellent work differentiating George and his twin brother Oscar, but there’s a reason the two of them have never been entrusted with carrying an A-plot.  They’re characters that work best in small doses, and the story’s strain begins to show once they make their way out into the desert.  The top-drawer guest talent do their best, but they’re more amusing ornaments than actual plot elements the way Marky Bark is and DeBrie will be.

If there’s a true failing these two episodes have, it’s that they don’t carry any of the emotional stakes that “Flight of the Phoenix” did.  That episode saw a man we care about brought low, and then lower still, while challenging him to claw his way out.  These two didn’t feel nearly as stand-alone, and while from a storytelling perspective I can appreciate the importance of setup time, that doesn’t mean I have to enjoy it.  I’ve said since the beginning that this experimental structure will either be the flagpole from which this season proudly flies, or the stick that will be used to beat it.  Advocates of the latter point of view will be able to hold up this pair of episodes as examples of structural weakness, and they wouldn’t be wrong.

That said, there are plus sides.  As I mentioned, George Sr. gets a great guest cast behind him.  John Slattery takes everything that makes him charming as Roger Sterling and shows that it can all be made incredibly shady with the addition of a beard.  Mary Lynn Rajskub takes what could have been a hacky character premise and totally sells it with a permanently deadpan expression, and she’s helped along by everyone around her taking her telepathy at face value.  And as China Garden, Karen Maruyama tackles stereotypes of quiet, submissive Asian women head-on...with dynamite.

As I watched the new season, it was during this two-episode stretch that my faith wavered the most.  It was where, in the deep corners of my mind where unsavory thoughts go, I wondered: Has Mitchell Hurwitz fucked this up?  Some of that is the runtimes, which are far too long to sustain the fast pace upon which Arrested made its name.  And some of that is, as I pointed out in my last review, that the structure deprives the show of one of its greatest strengths: the power of its ensemble when assembled in a single place like all seven Dragonballs.

But I have to applaud Hurwitz’s ambition.  Arrested Development changed the sitcom game, and here it’s endeavoring to do that again.  And upon rewatching, these episodes do improve (though not as much as some others).  It poses a question, though: should weaker installments be forgiven if they’re necessary to set up stronger material down the line, or is the claim that it’s “necessary” just a cheap defense to excuse a product that doesn’t measure up?

Turn it over in your heads.  We’ll see where you land when we get to next week’s episodes: the point where, at least for me, season four finally gets some real wind in its sails.