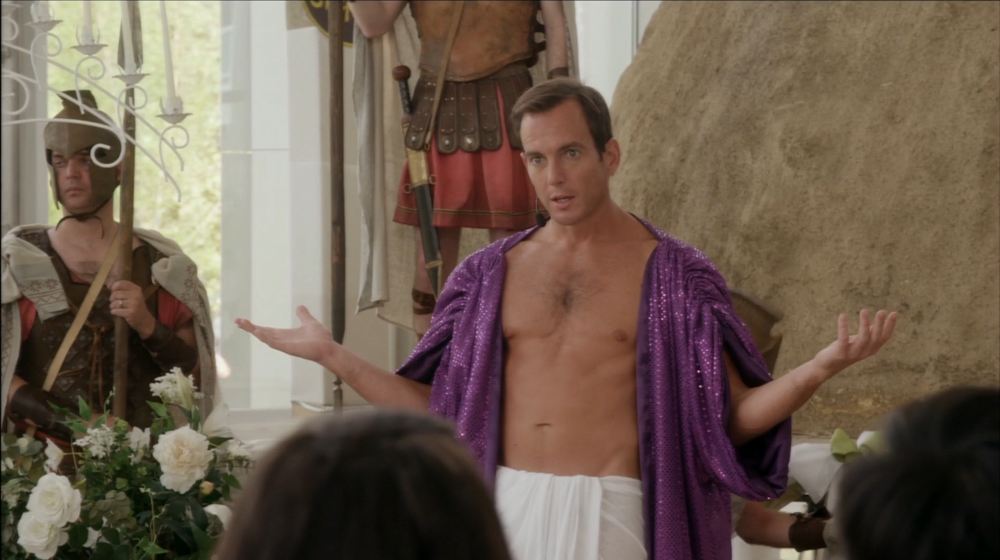 Since that fateful day in 2003 when Arrested Development first broadcast, something’s been central to the premise of this show: that in the face everything that stands against the Bluths, there’s always been the one son who had no choice but to keep them all together.  Season four changes that: Michael removes himself from the dealings of the Bluths, and for the first time they’re all left to truly fend for themselves.  Even the opening credits alter themselves appropriately; the narration changes depending on the spotlighted Bluth, and each of them has their own distinct backing instrument.

If season four’s thesis is indeed to see how the Bluths fare when they’re apart, then the answer so far is a resounding “not well,” an answer “Double Crossers” and “Colony Collapse” do nothing to change.  “Double Crossers” is the weaker of the two, once again limited by the scope of George Sr.’s character, while the GOB-centric “Colony Collapse” ranks up there with some of the best episodes the show’s ever done.

“Double Crossers” introduces one of the last major puzzle pieces of the season: Republican candidate Herbert Love, a spot-on pastiche of deranged businessman Herman Cain.  Much like the Balboa penthouse gathering, the post-Queen Mary police station scene, and the Cinco de Cuatro party, Love’s fundraiser is a sequence where fleeting glimpses of other cast members in the background tip viewers off to the fact that we’re going to be revisiting this one again a few times--a promise Hurwitz makes good on in the very next episode, in fact.

“Double Crossers” has the unfortunate effect of feeling like a shallow grave where a lot of middle-of-the-season exposition had to be dumped--how else to explain that sudden Michael-and-GOB interlude in a George Sr. episode?  There are some great moments: the runner with George’s increasing impotence, how that leads him to Orange County Imagine, and how well Jeffrey Tambor takes to his character’s defanging.  And of course, it provides a welcome return for John Slattery’s Doctor Leonard and Mary Lynn Rajskub’s Heartfire.  But two things work against “Double Crossers.”  The first is that, as I’ve said before, George Sr. can’t quite carry an episode by himself, especially one this long.  And the second is that it’s sitting right next to one of the gems of the new season, “Colony Collapse.”

GOB has always had the most outsized personality of all the Bluths, and it’s easy to see why he became the show’s breakout character.  If anyone in the family was going to benefit from extra-long episodes with a solo spotlight focus, it was going to be him.  And just as George Sr. finds himself somewhat wayward without his second son to keep him in check, so, too does GOB: stuck in a series of poor life choices that would be depressing if they weren’t so goddamn funny.

As with “A New Start,” a lot of the fun in “Colony Collapse” comes from seeing the ways GOB gleefully blusters through the lives of the rest of his family.  That innocuous limousine that’s shown up here and there suddenly falls into place as another recurring thread hiding in plain sight.  It pays off an orphaned punchline from Tobias’ storyline, and in turn sets up one to pay off in Tobias’ own next episode.  The strangely catchy tune from Lucille 2’s apartment gets an origin story.  And from this point onward forget-me-nows will cause their own trouble for the Bluth family.

GOB’s new friends fail to make much of an impression, but his old ones distinguish themselves well.  Ann is the episode’s secret weapon; Mae Whitman gets a chance to use some of the caustic wit that made her so great in Scott Pilgrim vs. the World, and she’s the best person to play the “hilariously un-sexy” type this side of Tina Fey.  Tony Wonder says little, but is at the centerpiece of one of my favorite visual gags of the season.  And poor Steve Holt! is great at providing some perspective for GOB’s casual cruelty.

“Colony Collapse” succeeds where “Double Crossers” doesn’t because of its sheer audacity.  It gives us the ultimate capstone to the “Her?” motif, a dogpile of digs at the expense of organized religion, and it connects bits of the season arc in a way that doesn’t leave the stitches showing and finds its roots in the spotlight character.

And now, with the jokes flying faster than ever, we’re breaking into the second half of the season.  It’s a return to form, content-wise, and a complete departure stylistically.  So as it all comes together and we see how the Bluths live without Michael around, I pose a different question now.  Does Hurwitz’s grand storytelling experiment truly qualify as “television?”

More on the next Arrested Development.

Mice-ellaneous:
Posted by Wine and Pop at 2:22 PM