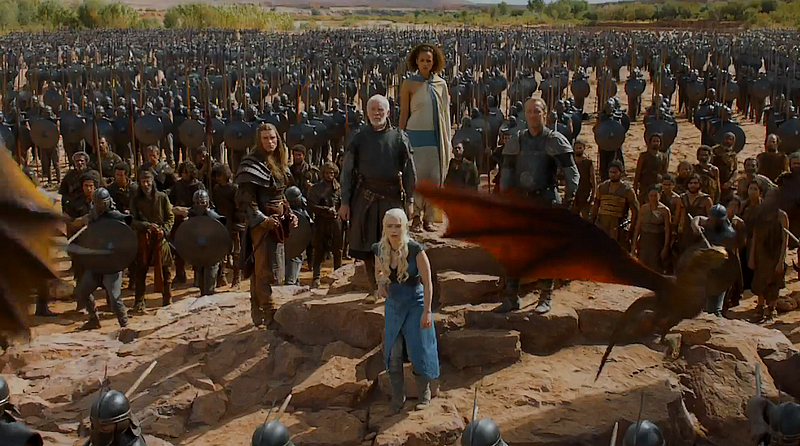 I’ve gotta tip my hat to the Game of Thrones showrunners.  What better way to ease viewers back into their world after the trauma of last week than by showing them all new atrocities?  As a friend of mine said, in a prime example of something I wish I’d thought of first: now Robb definitely knows about rockin’ a wolf on his noggin.

But with him and Catelyn gone and ten extra minutes of runtime, this finale gave us extra time to do more than just check in on everyone as the past two have done.  We went down the checklist, sure, but instead of feeling like an epilogue it managed to neatly conclude a lot of this season’s story arcs while opening the characters up for what season four holds (with one exception).  It’s largely because we’re coming to the halfway point of a book rather than an ending, but I appreciate the difference.  It feels less like a novel this way, and more like TV.

The Lannisters get the lion’s share of the show, and it’s richly deserved; in hindsight, this season’s really been about them.  Charles Dance closes out an MVP season with a scene where he and Peter Dinklage get to tag-team in calling out Joffrey on being a little shit, followed by one where the two of them talk about family obligations.  Of course, that’s always what the Lannisters talk about.  Even when Cersei and Tyrion are alone, their talks inevitably turn to their father’s favorite subject instead of anything else.

Which, come to think of it, is an interesting way to view this season’s story in retrospect.  Much of this year’s action turned on the choices made by mothers: Catelyn’s decision to let Jaime go indirectly led to the Red Wedding when she weakened Robb’s position enough to make him turn to the Freys in desperation.  Cersei’s and Olenna’s political machinations led to the tense Tyrell-Lannister alliance.  And then of course, there’s Daenerys, first mother of dragons, now mother of thousands.

I’ll admit: her one sequence in this episode is the reason this gets a less-than-perfect grade.  It was a cool enough moment, but it wasn’t season-ender worthy (I had my theories as to which cliffhanger the showrunners might use...none of which came to pass.  Derp).  Yeah, now we can see she’s responsible for the fates of a lot of people, but that’s nothing we didn’t know.  Still, there’s something to be said for narrative progression.  Ten episodes ago, her every follower fit into one ship.  They certainly can’t now, can they?

Hey, you know who else was sort of a mother?  Melisandre, she of the demonic womb!  Stannis’ has long been one of my pet subplots, if only for the rich interplay between him, his Hand, and his witch.  He’s a king, but it’s the other two that have the real power.  Every time he tries to order an execution, there they are, undermining him and each other.  And notice how fluid the power dynamic is even between them.  Melisandre reads one letter and immediately declares the war she’s spent months fighting to be pointless and her greatest rival at court valuable, when less than a minute ago she was saying precisely the opposite.  Stannis’ head is stuck in his crown and Melisandre’s in her flames.  It’s Davos, the common man from Flea Bottom, who has the real perspective, and with it the power.

The show made a wise move with two subplots I decidedly did not like as much as Stannis: combining them.  Sam and Bran are great characters who are unfortunately passive by nature, which means their stories will always be less interesting than, say, Jon’s.  But having Bran encounter another member of the main cast is a good reminder that yes, he’s still a part of the show’s framework and not just hanging out in a stealth spinoff.  And Sam’s final return to the Wall brings us the welcome return of Maester Aemon: another man who, despite his blindness, can see the whole board.

Were it that Jon’s homecoming was as happy.  This is the other scene that didn’t entirely work for me.  Rose Lesley and Kit Harington are talented actors, but the structure of their scene forces you to empathize with their pain just after the awesomeness of Arya doing Arya things.  It’s like putting a slow song on a mix tape right after some snarly punk rock anthem: you just shouldn’t.

But on the other hand, let’s close with that snarly punk rock anthem.  Arya’s on the path to being a fucked up little girl.  And while the Hound is good at keeping her alive, he’s bad in terms of curbing her murderous urges.  Her small vengeance against the Freys was a nice “Fuck Yeah!” moment, but it was also disturbing to see a young girl plunge a knife into a man’s neck.  Her Braavosi coin, so central to the scene, is a nice visual cue for her close relationship with death, as are the words on which she began and ended this season:  “Valar Morghulis.”  All men must die.

This season, they certainly did.

Miscellaneous:
Posted by Wine and Pop at 12:02 AM