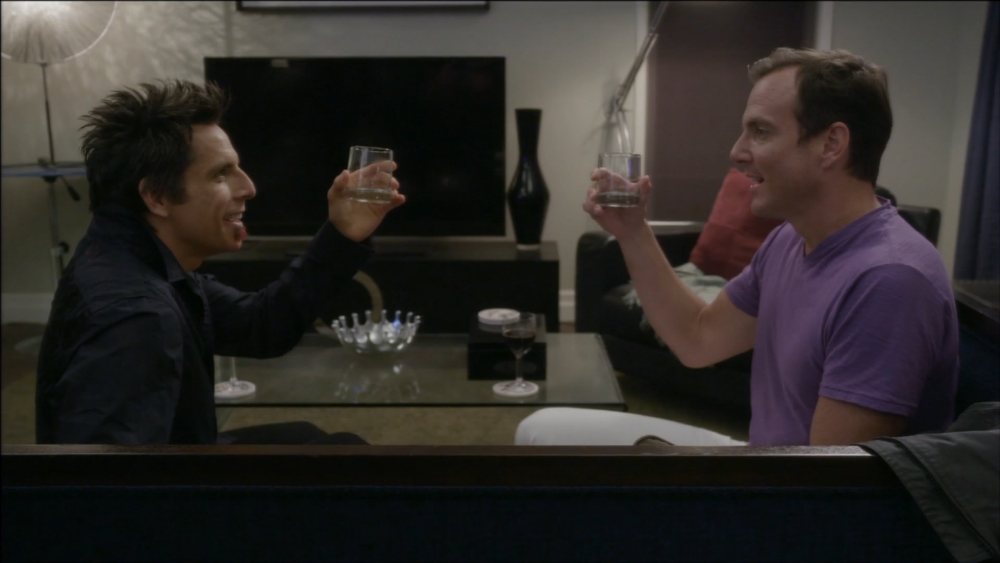 As the character that lies at the root of most of the Bluth family’s current troubles, it’s fitting that Lucille get her one moment in the spotlight so late in the game.  The season’s structure allows us to see the long-term effects of her scheming and power plays before actually checking in with Lady Macbeth herself.  And when we see her, she’s in a bit of a sorry state.  We get the moment we’ve spent all season building towards--the empty courtroom/seafood restaurant at Lucille’s trial.  It’s a delightfully absurd sequence, capped off by a shot of her in a giant freezer: the antithesis of what her sweat lodge tycoon husband is doing at that very moment.

We also get some moments of Lucille being a real human being, after almost three solid seasons of her as just a drunken racist quip machine.  In typical Arrested fashion, we don’t stop to dwell on them; after all, every second dwelling is a second spent not telling jokes.  But it’s good to know that Lucille has that capability in her, if only in short bursts.

I’ll take a second away from dissecting the story to single out Jessica Walter here.  Everyone else in the cast returns to their parts with aplomb, but she’s the one who most naturally recaptures what she had seven years ago (maybe because she’s had steady amounts of practice playing basically the same character on Archer).  Between her Fantastic Four audition, her great passive-aggressive exchanges with Liza Minelli, and those rare moments of vulnerability I mentioned above, she gets a great range of material to play--and fortunately so, because this is sadly her only spotlight episode of the season.

But Will Arnett’s performance is within a shade of hers--a task made easy enough by just how outsized GOB’s every action tends to be.  And in this case, it doesn’t get much more outsized than having hate-sex with his archrival, while each of them wears a mask of the other one’s face and thinks that they’re having a go with the stalwart Ann Veal.  It’s become a season full of people having sex with people they really shouldn’t: Lucille and Oscar, Lindsay and Marky Bark, and--well, we’ll get to that next week.  In the meantime, bask in the sheer glory of the fact that, in a way, Hurwitz turned almost all of his cast into sex offenders.

This pair of episodes possesses something that most episodes of Arrested typically don’t--villains.  Lucille has her own meltdown over the thought of being considered one, but I’m actually talking about Lucille 2 and Sally/Tony, respectively.  At first, I wasn’t sure about the way their characterizations had been altered for this season.  Lucille 2 was always dotty, but never spiteful or vindictive.  And while Tony Wonder was always something of an idiotic douche, Sally Sitwell was definitely a much more sympathetic figure in the show’s initial run.

But reconsidering things, I’ve decided I like these three characters’ left turns into villainy.  I like the idea that scumminess isn’t just restricted to the Bluth family.  These other high society creeps are just as bad as the Bluths; the only difference is that they haven’t gotten caught yet.  Of course, that begs the question: who are we supposed to relate to, then?  It’s a question that plagued the show from its early goings, but I think worrying about relatability misses the point of Arrested.  After all, this isn’t Full House; this is a bigger, more colorful, and possibly more twisted version of Seinfeld.  At the end of that show, the entire cast wound up in jail.  And the way things are going for the Bluths, that’s not entirely out of the question for them, either.

And besides, the presence of villains gives us a way into the hearts of two characters that aren’t good at interacting with people.  Pitting awful people against people that are even worse is a classic storytelling trick that pays great dividends (see: every “edgy” drama since The Sopranos), and here it pays off as well.  GOB’s deep narcissism makes him adorably incapable of recognizing friendship when he sees it, and Lucille hides behind her acid wit as if it were some sort of--well, what’s a word for a really big thing you use to keep people out of places?