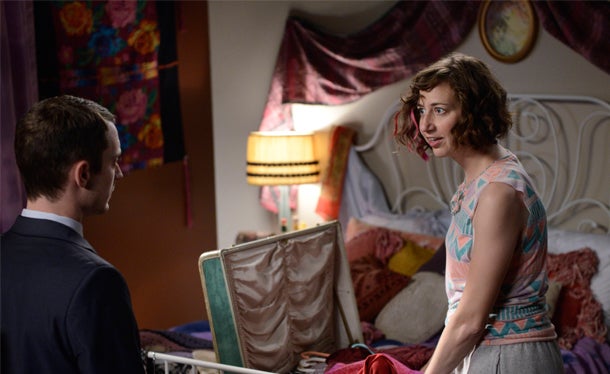 The latest episode of Wilfred explored the theme of “Shame” and did so in a very concise manner. The episode wasted no time with unnecessary side plots and instead offered us a rich story, along with the welcome introduction of the hilarious Kristen Schaal as Ryan’s new roommate, Anne. The episode also continued this season’s streak of standalone episodes that manage to stay relevant by showing us how poorly Ryan is doing these days. While Ryan is a consistently messed-up character, this season’s focus on this particular low point in Ryan’s life is just what this show needs to keep things compelling from week to week.

A big part of what made this episode work as well as it did was the lack of off-topic material, something that often brings down other Wilfred episodes. Ryan’s roommate struggles provided enough material to keep the story going for most of the episode and Wilfred’s side story played directly into that, which meant there was never a dull moment.

As well as being integral to the plot, Wilfred’s storyline was a great source of humor. His attraction to Anne’s messy lifestyle, his inability to accept that he had become fat and his “thing” all provided some serious laughs. His story also had the extra benefit of being thematically relevant; Wilfred suppressed his shame by denying that he had any problem at all, only accepting that he had become fat at the very end of the episode.

Ryan, on the other hand, unable to pay his rent and realizing that he’s basically a dog-sitter, felt overwhelmed by his shame. In order to combat this, Ryan attempted to find a roommate to help pay the rent and attempted to get another job as a lawyer. Wilfred, however, interfered as always, deciding for Ryan who his new roommate would be and successfully sabotaging his job interview. Ryan was then stuck living with Anne, a woman with seemingly no shame. This made Ryan extremely uncomfortable and he tried to force his messed-up views on her. After extensively criticizing her lifestyle, Ryan convinced her to get a normal job at an office. Eventually, however, Ryan realized that what he had done was wrong and encouraged Anne to return to her original lifestyle. In doing so, Ryan was also able to come to terms with his own shame and his unique lifestyle.

A thoroughly solid installment, “Shame” entertained and told a cohesive story. It also managed to keep the dramatic momentum of the season going by further exploring Ryan’s current rut. As long as Wilfred continues telling these kinds of stories in the future, season 3 should shape up to be great.

Nico Danilovich is a television enthusiast and amateur filmmaker. His work can be seen at www.youtube.com/thelazyneighbors
Posted by Wine and Pop at 12:25 PM