Comedy Review: "Ask Me About My New God!" by Maria Bamford 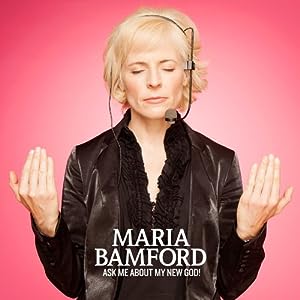 For one reason or another, my copy of Maria Bamford’s latest album, Ask Me About My New God!, was more than a little late in finding its way to my doorstep.  When I finally threw it on, the entire thing went down faster than a Pixie Stick.  But unlike a Pixie Stick, experiencing the same thing a fifth time in a row has yet to make me sick to my stomach.  If anything, I’d be more than up for a sixth.

In today’s modern comedy landscape, full as it is of women who elicit their laughter by relying on the shock of a pretty face saying filthy things, Bamford is a truly underappreciated presence.  Every bit as surreal as Mitch Hedberg, experimental as Steven Wright, and wordily witty as Comedians of Comedy tour-mate Patton Oswalt, Bamford has always pushed her comedy to strange places to see what kinds of laughs she can wring from it.  Most notably, just last year she released The Special Special Special!, a set recorded with only her parents as her audience.

Some material from Special shows up on New God, and it’s incredibly telling of Bamford’s talent that her jokes work equally well in an intimate living room and a club full of hip Portlandians.  Bamford, with all her usual daring, opens her set by taking all-too-accurate shots at the crowd before her, and the kinds of people that presumably make up most of her listening audience.  “I used to be like you,” she says.  “Get on my bike that I made out of harpsichords...Use the wind to power my artisanal crumpet factory...”

But she doesn’t stick with the low-hanging (if accurate) hipster stereotypes for more than a minute.  With that opening volley out of the way, she swings the focus of New God onto herself, and keeps it riveted there as surely as Sauron would fix his gaze on his missing jewelry.

As usual, her pet topics include her own personal shortcomings, her surreal interactions with her family, and the myriad ways her mind is her own worst enemy.  Never does this crystalize more clearly than in track twenty-two, “Terrible Relationships,” where she characterizes her relationship with herself as an abusive one.  Throughout the entire bit, Bamford happily tap-dances along the line between performer and character, slipping in and out of the persona of an apologetic battered girlfriend to darkly hilarious returns.  Other bits of hers tackle the issue of her mental health more directly, but none evoke the feeling of it more clearly.

This would probably be a good time to mention what is arguably Bamford’s most famous gimmick--the musical instrument that is her voice.  Her normal speaking voice, at least onstage, is reminiscent of a mouse that’s seen some shit, man.  But with that as her launchpad, it’s easy for her to adopt characters that range from a guttural eldritch abomination she uses to personify an evil sack of money, to a smarmy LA woman who sounds as smooth as a particularly sinister patch of velvet.  That level of control over her delivery allows her to elevate even the most banal everyday phrases into killer punchlines, and it’s a great example of her comedy showing her off rather than her trying to show off her comedy.

If the album has one outstanding flaw, it’s one that’s not of Bamford’s making--one of the audience members has an enthusiastic laugh, which unfortunately sounds like a fourth grader trilling a trumpet. To her credit, even Bamford points it out eventually, though it takes twenty-one tracks to get there.  Of course, that’s out of a total of thirty-three tracks, so as a listener you still get to enjoy over a third of the album trumpet-free.

I don’t know if this album will be a watershed moment in Bamford’s career, or if it, like her previous efforts, will be welcomed with indifference by the general public.  I’ve long remained mystified as to why she hasn’t been on casting directors’ speed dial for the past forever.  Between her great guest turn on season four of Arrested Development and the level of quality on Ask Me About My New God!, 2013 has been full of compelling reasons why she should be.