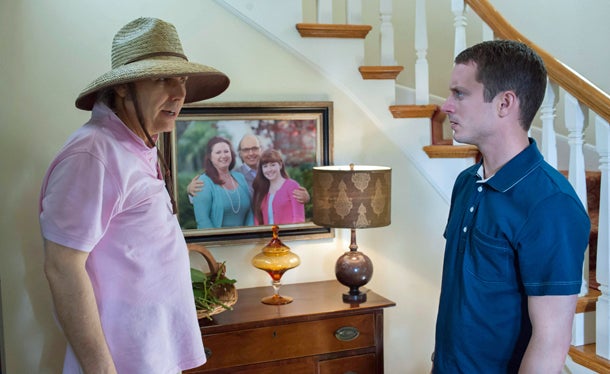 The previous three episodes of Wilfred have done a wonderful job of continuing to explore Ryan’s current rut in life while also focusing in on a specific and compelling issue: Ryan’s family. However, Wilfred is not a drama, but rather a dark comedy, and so, the intense look into Ryan’s deep-seated issues could not last forever. Often, when a show like this finds that it needs to take a step back from its more dramatic storylines, the episode that makes the transition does an inadequate job of doing so. Forward momentum comes to a screeching halt and characters seem to forget about the things that meant the world to them just a few days ago. “Distance,” however, overcame these common missteps and instead provided an expertly crafted transition episode.

Although the episode as a whole would take a step away from Ryan’s family issues and the mystery of Ryan’s childhood drawing, Ryan himself did not. The things that meant the world to him a few days ago still meant the world to him now. Wilfred, on the other hand, realized that (just like the show itself) Ryan was spending too much time focusing on some really heavy stuff. So Wilfred, along with his old buddy Bruce, concocted an elaborate scheme of mind games to slowly distract Ryan from his preoccupations. This provided a smooth transition for the show from drama to comedy, as Ryan indulged in a ridiculous competition, all while believing it was bringing him one step closer to the answers he sought.

Another way in which the episode kept the forward momentum of the show going without dwelling too much in drama was by bookmarking the episode with plot progression. Ryan began the episode still trying to solve the mystery of his childhood drawing. Distracted by Wilfred, however, it was not until the very end that Ryan made any more progress. After having spent some time away from the drawing, Ryan was finally struck with the inspiration to investigate the blue shed and consequently discovered a mysterious symbol. Although this did not provide many answers in this particular episode, it’s sure to play a significant role in the future and served as a promise to the audience that Wilfred isn’t going to simply forget about its mysteries any time soon.

The final reason this episode worked so well as a transition episode from drama to comedy is the simple fact that it was fun. The uncertainty of who was on whose side between Ryan, Wilfred and Bruce, along with the extreme nature of each trick, ensured that there was never a dull moment. It was also great to see Ryan actually manage to hold his own with Wilfred and Bruce, despite being very much out of his league. By keeping things fun and exciting, “Distance” distracted us just as much as Wilfred distracted Ryan, thus allowing a smooth change in tone and subject matter.

Although not nearly as mind-bending or dramatic as some of Wilfred’s greatest episodes, “Distance” accomplished exactly what it needed to and entertained while doing so. Thus, “Distance” is a great example of how shows can move forward from highly dramatic story arcs and ease back into the normal swing of things. Hopefully, however, the return to a primarily comedic tone won’t last too long and the final episodes of season three will once again blow our minds.

Nico Danilovich is a television enthusiast and amateur filmmaker. His work can be seen at: www.YouTube.com.TheLazyNeighbors
Posted by Wine and Pop at 2:00 PM