OVO vs. XO: Drake & The Weeknd

For all of his talk of being a self-made man, Drake is deeply concerned with lineage and legacy. His lyrics are made up primarily of reflections on how his past has brought him to where he is. Each failed relationship, each passive aggressive dismal, and every argument with his family has been encoded into the mythology of Drake, which he has used to propel him into the top tier of mainstream hip-hop stardom. Even when making a preposterous amount of money, Drake has remained surprisingly grounded and even humble, showing up ringside at rap battles and relating stories about his signing and gratitude to Young Money at every given opportunity. Two years ago, when Drake was solidifying his critical credibility and radio domination with Take Care, he also took the time out to co-sign a fellow Toronto native and generally sad dude by the name of Abel Tesfaye, better known as The Weeknd. But when The Weeknd decided to release his first full-length record, Kiss Land, with Universal instead of Drake’s OVO imprint, Drake brushed off his former prodigy in a short lived beef. While the animosity has been quashed since, it’s not hard to see by listening to their most recent releases that the two have developed into vastly different artists. 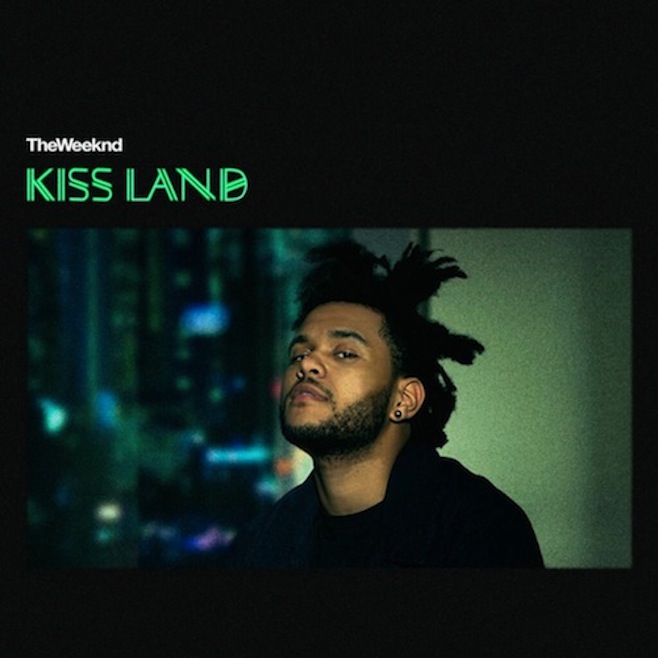 First and foremost, The Weeknd does not give a fuck about the past, or much of anything really. While his initial run of mixtapes in 2011 (House Of Balloons, Thursday, and Echoes Of Silence, all conveniently collected and remastered in last year’s Trilogy) Tesfaye and producer Illangelo were able to craft this drug-induced nihilism into a sound that was haunting, mysterious and occasionally profound. With Kiss Land it seems that this devil-may-care attitude has extended from his lifestyle to his songwriting. While Tesfaye has never been a particularly adventurous singer, content to let atmospheric effects and a solid staple of short reusable melodic fragments to do the heavy lifting for him, he plays it safer than ever on this record, mumbling his way through songs and rarely putting in the effort to craft an actual hook. Kiss Land resembles The Weeknd’s stronger material in form, but not in function. It has the requisite multi-part epics ("Professional" and the title track) but unlike his older songs, the transitions from section to section happen because that’s what a Weeknd song is supposed to do, not out of musical or narrative necessity. Tesfaye only comes to life when pushed into new territory by the production. While neither “Belong To The World” nor “Wanderlust” are going to see much rotation for me, they are at least interesting digressions from the usual morose slow ballads into more groovy and up-tempo territory.

As for the rest of the production, Tesfaye does find a few new ways to keep the signature Weeknd sound fresh, even if it doesn’t save the songs themselves. With semi-stardom has come a vastly increased budget, which is used to construct the sonic equivalent of Blade Runner’s Los Angeles, complete with samples of rain and enormous Neon synth pads. But while the increased production values help build some of the album’s more interesting sonic moments, like the woozy trap beat in the second half of the title track or the thundering percussion on “Live For”, they also make the mistake of pushing Tesfaye’s vocals to the forefront. This is the final step in the gradual demystification of The Weeknd, a process that has done as much to hurt his credibility as any musical decisions. It was a lot easier to like Tesfaye when we had no idea who he was, but now that’s impossible, and we can see him for what he is; not “a nice guy with nice dreams,” as he once put it, but just some asshole who does a lot of drugs and has a really creepy fetish for Asian women.

Drake on the other hand, only becomes a more interesting person the more we learn about him. While he’s still a flawed person, coming across as kind of controlling and judgmental on his softer tunes and slightly egotistical on his more brash tunes, he’s always able to place these less savory qualities within the whole of his personality. His commitment to keeping his lyrics jam-packed with specifics from his personal life keeps him accountable, and he’s smart enough to allow other people to call him out on his bullshit on his own records, which Jhene Aiko does expertly as a hypothetical lover on “From Time.” There’s a good chance that no rapper has apologized more on a record, as Drake does about making jokes at the expense of his Jewish heritage or about his expired drivers license, but it doesn’t come across as back pedaling or uncertain. It comes from the same place of confidence that allows him to be equally at home as a rapper and a singer. He’s never outstanding at either -- it’s rare that he moves out of his short range and his command of rhythm is perfectly functional but never ear catching -- but he understands exactly how to use each to get his point across.

The production on Nothing Was The Same is smart enough to stay out of the way and let Drake be Drake. As usual Noah “40” Shebib leaves gaping holes in the center of his mixes while filling in the lower register with barely audible sub-bass and the upper range with soft pads. More than ever, Drake is surrounded by pianos, both acoustic and electric, adding an extra layer of sentimentality that suits the more personal moments. By contrast, the more energetic tracks end up sounding relatively hollow, especially compared to the lush stadium sized production of Take Care. But what the album lacks in bangers it makes up in cohesion. Early on in the album’s opening track Drake mentions that he’s living out his 90’s dreams by hanging out with Wu-Tang Clan member Cappadonna, and from there on out the references continue to find their way in, either lyrically or in sampling. On top of that, when Drake gets especially reflective, the sounds around him will start moving in reverse, mirroring the shift in tense in the lyrics.

Details like that aren’t flashy on the surface like Kiss Land’s nocturnal dystopia, but they leave the listener with more to chew on after the album ends. That’s ultimately where Drake and The Weeknd differ. Abel Tesfaye’s hedonism gave him the drive to make an impact with three mixtapes in one year, but has quickly burnt him out since. Drake is built for longevity, gradually honing his craft and treating his flaws for what they are instead of glorifying them.