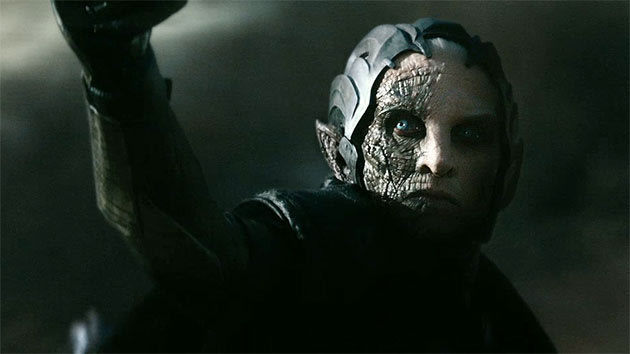 Those elves are at the center of both the newest Marvel movie Thor: The Dark World and one of the main recurring problems in the series: the lack of villains worth giving a damn about. This has been an issue since the very beginning: who recalls the motives or characteristics of Iron Man’s Obadiah Stane, beyond his incessant abiding? The second Iron Man didn’t fare much better, though that movie’s problems extend far past cardboard bad guys (as great as Sam Rockwell, the one redeeming factor of that pile of trash, was, his character was non-existent). Thor and The Avengers utilized Loki, the career-defining role of Hiddleston, but one victory hardly creates a trend. 2013 was the worst year yet, with both Iron Man 3 and now the new Thor dropping in empty enemies with little in the way of characterization or nuance. (To be fair, the reveal behind the Mandarin was brilliant, but Guy Pearce’s character was woefully lightweight).

This is hardly a problem unique to Marvel. The Amazing Spider-Man’s greatest flaw was the waste of a talented actor like Rhys Ifans in the thankless role of Dr. Curt Connors. What did the Lizard want again? Why was any reasonable person expected to care? There were hints of intrigue in Connors’ ties to Peter Parker’s parents, but any development of that thread was brushed aside for the sake of stringing along the mythology to franchise-length (this is another problem with superhero films that deserves a column of its own). Man of Steel took a great actor and a key villain in the Superman mythos and reduced the character to boring, generic platitudes.

As the greatness of Loki-as-villain proves, I’m not insisting on these franchises becoming deep character studies of what it means to be “evil”. Loki is a great villain because the Marvel universe has attached charismatic writing to a charismatic actor. As the failure of Ifans’ Lizard and Rockwell’s Justin Hammer prove, it’s rarely the actor left to blame. Hiddleston is marvelous, but Loki is an icon because he is given great things to say. Along with that, his reasons for villainy (or, ugh, “origin story”) stems from at least a little bit more than simply “fuck the world”, as if the most powerful men on earth are all college sophomores who really “get” Nietzsche. Daddy issues are far from original, but in the current landscape of cinematic villains, Loki brings something more than “nihilism plus magic”.

There are other routes to go down when writing a villain, of course. Perhaps the best example hails from the only super-villain to ever win an Academy Award. Heath Ledger’s Joker was a great creation for a number of reasons, but one of his most fascinating details was the lack of any true origin story. The Dark Knight made The Joker’s incoherency of purpose a main facet of his identity, and that is why the character populates Halloween, even five years later. Alfred Molina’s Doc Ock (Spider-Man 2) didn’t even rely on his story to entice. That character was simply a marriage of performance, script and character design, with his physicality adding to Ock’s threat and power on-screen.

I understand that the emphasis of a superhero film is, generally, the hero. And the lack of development in an antagonist is somewhat understandable in the first outing; a franchise’s attempt to acclimate the audience to a new world. But in a sequel, when the main conflict of the hero is repeated and the universe is only slightly expanded, a strong villain can support a further explanation of the series’ themes (The Joker in The Dark Knight) or simply reinvigorate what made the first effort enjoyable (Doc Ock in Spider-Man 2). Beyond that of course is the hope that all characters in every movie are thought-out and developed. But if the focus is squarely on appeasing an audience and creating profit, there’s no reason to ignore solutions that could aid creatively and commercially.

(Spoilers for the post-credits tag in Thor: The Dark World ahead)

The trend may be changing, at least to some extent. The post-credits tag for The Dark World shows Benicio del Toro doing his best “Tom Waits by way of Mugatu from Zoolander” in the upcoming Guardians of the Galaxy. The Internet seems unsure if the role is expressly that of a villain, but his goals as established in the tag seem to imply so. 2015 will see James Spader, one of the most beautifully hammy actors we have facing off against the Avengers. There’s no definite promise that either of these villains will become icons, but the foundation for hope is there.

The reason that I so dislike the taste of generic villains is fairly simple: if the antagonist is poorly developed, it is difficult for the film’s conflict to hold any weight. Of course Thor and Loki and fainting-Natalie Portman will be fine; nothing as simple and unprofound as the Dark Elves will take these characters down. Tony Stark will not be bested by revenge-of-the-nerd Guy Pearce. The stakes drop dramatically when the threat is ill defined. And that definition doesn’t have to be a dry explanation – far from it. The situation should simply be unique and authentic and, if the villain’s motives are a mystery, that should inform the events unfolding. We've seen enough people who want to destroy the world simply because. "Simply because" is bad writing. "Simply because" is not befitting of creatures that wish to wipe humanity from the face of the Earth. In universes where literally anything is possible, from gods enjoying a cup of coffee, to the richest man in the world flying around in a metal suit, "simply because" is how the bad guys win. These are not the villains we deserve, or the villains we need now, or ever again.
Posted by Wine and Pop at 3:22 AM