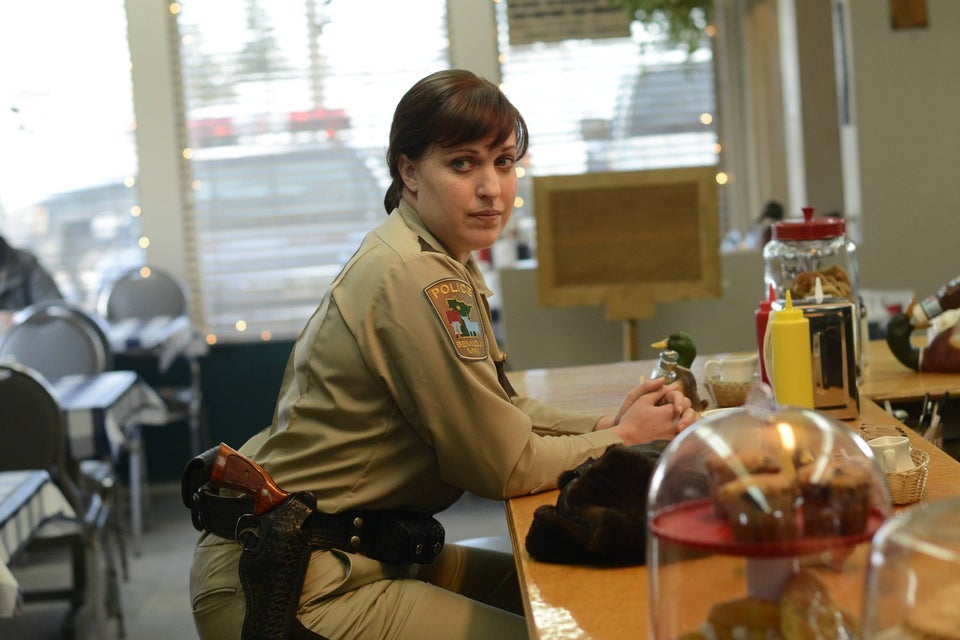 The series premiere of Fargo was a tightly wound masterpiece, constricting throughout the hour until the massacre at Lester’s house unwound the tension and kicked off the show’s true story. That begins in “The Rooster Prince” and it can’t help but feel limp comparatively. The premiere had a beginning and end all in one, while this episode settles into a middle that sets up new threads and characters and replays scenes to emphasize points that have already been made.

That last bit is most troubling in the story of Molly Solverson. She spends nearly all of “The Rooster Prince” attempting to prove her angle on Lester is true to the new chief Bill. Allison Tolman plays it well, and her final confrontation with Lester is appropriately tense, but it all feels like build-up without any real character pay-off. Molly’s best scene comes at the episode’s close, where her father expresses his concern for her, in what seems to be heavy foreshadowing of danger to come.

Foreshadowing is everywhere in “The Rooster Prince”. Gus Grimly tells his daughter, Greta, that he prioritizes being her father over his job as a police officer. Greta seems more like Molly than her own father; both characters rebuke quaint notions of safety for the realities of a dangerous world. Even Grimly’s looks towards his married neighbor betray the simple world he’s trying to build for his daughter. This all feeds into the central tonal conflict of Fargo, both film and show; the nice platitudes bury the horrors of life. But Greta, Molly and Marge from the film aren’t naïve about this balance. This is the story of good versus evil. My guess would be that good ultimately triumphs for one central reason: the good people seem to understand the bad, and the opposite doesn’t hold true.

While much of this battle plays out between characters, Lester is grappling with transitioning from one side of the divide to the other. The murder of his wife doesn’t seem to have affected him much beyond paranoia. Even his break-down amongst her clothes is forced, more putting on a show for himself than anything else. Lester is unquestionably a bad person, as much as anyone can be simplified to one side of the war. But he was not always this way, and the past version of him has the habit of leaking out in small amounts.

Lorne, on the other hand, is pure evil, the embodiment of it even. He’s currently working his way through an assignment that doesn’t clearly relate directly to the other goings-on in the show, beyond his involvement. And it suffers a bit for this, asking the audience to be so invested in the character, or the notion that the two stories will inevitably collide, and not to mind what now feels like a bit of wasted time. The cast in this plot is excellent, especially Glenn Howerton at his sleazy best, and Gordon S. Miller as the slow, joke-loving son of supermarket king Stavros Milos (Oliver Platt).

In the pilot, Noah Hawley’s writing has sublime, but here his hiring seems like a bit of a concern. Hawley has previously worked mainly in network TV procedurals. The pacing of the story here is so vastly different, that I wonder if he can adapt his abilities to the format over the course of the season. The writing in this episode is still mostly terrific (Lou Solverson’s speech on finding good in the faces of your child is a highlight), but the plotting is starting to feel a little shaky. Hopefully this is a problem with the episode, not the show as a whole, something next week’s episode will likely tell us.

“The Rooster Prince” is far from bad. There are a number of scenes that work beautifully, and most of the characters are deepening in important ways. Tolman especially is giving more dimensions to Molly, and setting her up to be the force of good in a crooked world. The parable of the episode’s name sees a man lose his identity, believing himself to be a rooster. His family tries to make him remember who he is, but to avail. Instead, he must relearn how to wear clothes, eat food as a human would, all while believing himself to be a rooster. These characters too must adapt to the world around them, shifting their behavior without losing their identity. The good must find evil without being overwhelmed by it, and the evil must shroud themselves for fear of being caught. And the rooster prince himself, Lester, sits in the middle of it all, having learned the habits of an evil man and a good man all at once.