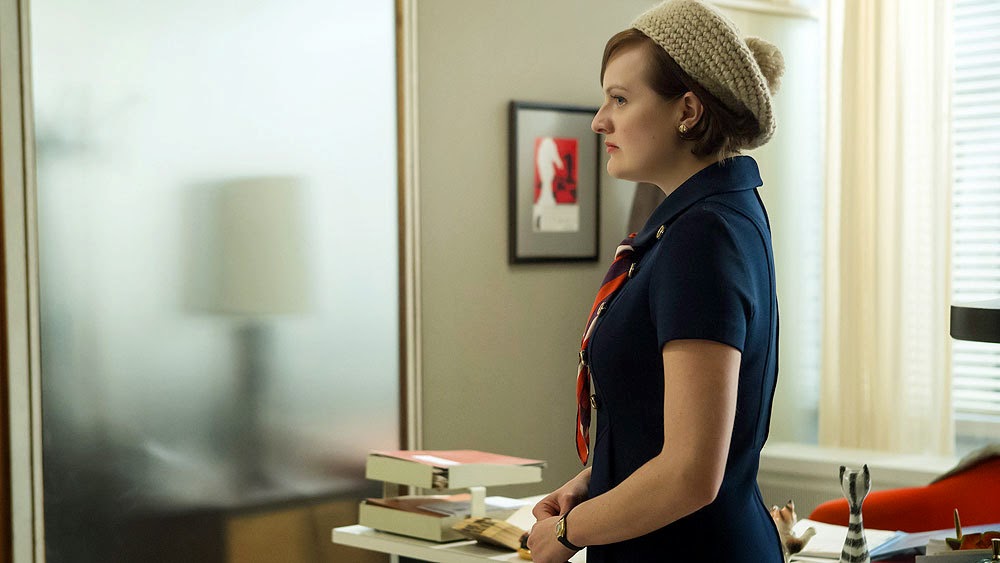 Mad Men is a show about doors.

Which means, in the language of Mad Men, this is a show about time. We open on a shot of Freddy Rumsen’s eyes, staring through the camera, through the screen, selling us a watch. But this is the same series that turned a chocolate bar into a symbol of warped childhood, so Freddy isn’t just espousing the benefits of a timepiece. He’s looking to market, as he puts it, a “conversation piece”. Our view of Freddy’s eyes pivots between a longer, full-body shot, and a close-up on his expressive, determined face. This is the prototypical Mad Men pitch, giving an emotional weight to what seems like a trivial object. It reorients us in the world of 1969, dramatically so. And perhaps most importantly, it gives us the vantage point of Peggy Olson.

Peggy is a character that struggles dramatically with doors in “Time Zones”. The tenants of her apartment have little concern for the privacy that her locked door implies. On top of every other issue in her life, a clogged toilet represents her inability to move, to gain any ground. She’s being stopped at every avenue. One of those is a door that now reads “Lou Avery”, where it used to hold the false name of a broken man. But more on him in a moment. When Peggy approaches Lou, attempting to make amends for her early challenging of his authority, he rebukes completely: “I don’t know, Peggy. I guess I’m immune to your charms.” Lou enters his office, while Peggy scowls. At the episode’s close, Peggy collapses behind her door after days that have viciously reminded her of how it felt to be untrusted at work. And the more metaphorical opening comes from the brief return of Ted, a man who promised her a future, only to retreat to his family. It was a fair decision, but a decision all the same. And options are not seemingly endless for Peggy, despite her talent and determination.

Joan is the other woman of SC&P looking to get her foot in a door both symbolic and physical. The tragedy of season five’s “The Other Woman” is recalled on several occasions here, most clumsily when a professor asks her what she’s willing to trade. Though the moment is played too obviously, it’s still authentic to the unfulfilled responsibility that she thought would follow that deal. Yet, nearly two years later, she remains in a similar position as before, have been scolded recently for her attempts at squeezing into accounts. Here, she takes advantage of an opportunity opened by Ken. She bests the head of marketing at Butler Footwear. And she does so from Ken’s chair, soaking in what the office represents. Though her story here ends with him telling her to stay out, she’s made leeway. Joan has shown that she can impact the company, and proven everyone from the aforementioned condescending teacher to that head of marketing wrong.

Where Peggy has seemingly receded, and Joan has subtly progressed, Don is stuck out of the office and bouncing between two coasts. Megan is out in California, getting callbacks for TV dramas and enjoying her more bohemian lifestyle. She begrudges his purchase of a TV, and has no desire to live near the water. But Don insists on showing his worth, and the best way he knows how to do this for her is with money. To prove that same worth to himself, however, he finds a way to get ideas to SC&P without their knowledge. It turns out the opening shot wasn’t simply one of Freddy looking to sell us a metaphor. No, Freddy is merely the latest incarnation of the ad man formerly known as Dick Whitman. This freelancer is another mask, a conduit of Don to get his inner-self to the foreground, out into public, without having to open the wounds he tested in the Hershey pitch last season. Don is faithful to his wife, despite the option of spending a night with a woman on his flight home from California. But he is also at a disconnect from everything else. His trip to Los Angeles offers little in the way of opportunity or romance with his wife. And, most threateningly, Freddy warns him about the shame of being “damaged goods”. This is coming from the man who once pissed his pants and lost his job, becoming a laughing stock for a number of years. Don isn’t quite there, buoyed by some slim chance of reconciliation. Yet all doors close, at one point or another.

Well, maybe not all doors. When Don returns to New York, he finds that he’s unable to seal the apartment from the cold of January. In last season’s premiere, Roger waxes poetic to his therapist about how the doors of opportunity should pivot our lives, but they never do. We always arrive where we’ve already been. In that same episode, the doorway represents the inevitability of death, the final place we walk through before passing on to whatever comes next. And the final shot of the episode emphasizes this idea. Don, shivering, looking nearly as wounded as he did in the fetal position, framed by a doorway. What does this man have ahead of him? Is it as miserable as what has come before? Or has a real change occurred, with Don able to prove himself through Freddy and his commitment to his wife? Only time, that goon, will tell.

While that final shot catches us up to where Don is – namely, exactly where he’s been before – the opening of the episode seems just as vital, if not more so. Peggy began the show as the audience surrogate, a naïve stranger to this world. And this far along, it’s distressing how close she seems to that beginning, at least in the eyes of her boss. Over the years, Don developed a deep trust and respect for Peggy, but Lou is too incompetent, rude and quite possibly sexist to understand the kind of person she is. Peggy lashes out at Stan, her eternal punching bag of a friend, speaking to the frustration she feels about the idiocy around her. You see, Peggy cares deeply about this work. It’s an artistic pursuit to her and some dumb slogan about how accurate the watch is won’t cut it. And of course she’s this way, having learned from Don himself. Don never sold products; he sold ways of life. There’s a reason Peggy’s outrage is played directly next to Don’s conversation with Freddy. Perhaps Don is just looking to leverage his way back into the company, but more likely this is just something he needs. He thrives in the mindset of constructing false lives, and he’s been stripped of his power to do so. He opened himself up in the Hershey meeting, and he’s no longer allowed to sell lies to companies to be made into commercials. So he finds a way in. He finds a way to construct.

Peggy is growing into a similar person, but this isn’t a similar time. The woman on the plane with Don dismisses Madison Avenue; the world has become disillusioned, and no matter how good the copy is, people aren’t as willing to buy into lies. Of course, the great irony here is that at no time in the past, when advertising could be considered an art form, would a woman like Peggy have been able to rise to the top. She’s both in the wrong time and intrinsically tied to the present.

Time is a tricky thing. It gives us new experiences, provided we fight for them. But it also strips us of past lives, of the various skins we used to wear. Hopefully we’re able to combine our various selves and create a person that can weather the physical and emotional pressure that time delivers. Or, in the worst-case scenario, it leaves us unable to cope. The people around us change at different speeds than we do, and it can be impossible to keep up. Society shifts, and we must shift with it or be lost in the past. And, in the end, time pushes us through one last doorway, and every decision we've made tethers itself to that final instant. Lou asks Peggy, “Why are you making this so hard? Open the door and walk in.” Stupid, stupid Lou. Opening doors is the most terrifying thing we do. Because as good as Accutron watches may be, we never truly know what time we’ve stumbled into. The first time, the last, or one of the million stuck in the middle.