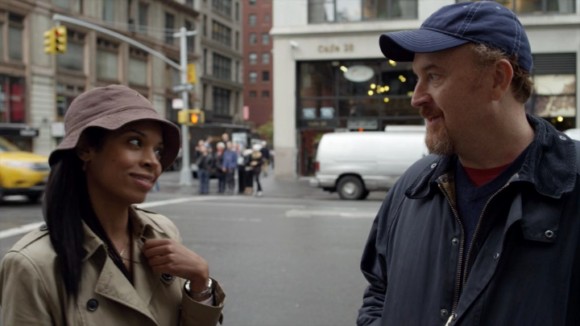 The first episode of the six-part “Elevator” ends with Louie, on stage, asking a question that the rest of the arc looks to answer: “How do you know you love somebody?” Various types of love are explored, from that between a father and his child, to the embers of lost marriage. The answer to this question, in every context seems to be the same: you know that you love somebody when nature pushes, and you push back.

“Elevator” was the most quietly ambitious story Louie has ever told, extending the length and emotional language of the set-up throughout this exploration of love and communication. We begin with a scream; in the dark, Jane awakens from a nightmare, but believes herself to still be asleep.  She holds to this truth the next day, and sets off events that lead to her divorced father and mother reconnecting, if only for a moment. Louie must deal with his daughter’s cynicism that he himself gave to her. See the way she echoes his questions about her being angry when she asks if anyone is mad at her. Note how he shelters her, occasionally going against his own belief to let his children experience sadness. Parenthood is complicated, and Louie and Jane’s relationship changes as she grows older and more jaded, and as he remembers the days before she was alive.

That flashback, in part four, is one of the greatest things Louie has ever done. The scene is tragic and poignant, showing how long Janet and Louie’s relationship had been corroding before their split. The two connect here, in flashes, whether it be the first time he has made her laugh in years when leaving a therapist, or his carrying her to the car in the middle of a hurricane. There’s no blind hope here for a true reunion, but as that therapist says, it is only important that they get along. For their children, and for themselves, they must learn to communicate.

At one point in that scene, a glass door separates the two. We, the audience, cannot see this at first, and believe young Janet’s muted speech to be a diagnosis of Louie’s inability to listen. And it is, to a certain extent. Then he opens the door, and they calmly agree to end whatever it is they have. Perhaps this would have worked, but their last sexual hurrah will lead to a child. A flash of communication collapsed by the events of life. Speaking openly is the key “Elevator”, but something Louie struggles with, for reasons both his fault and fate’s.

Amia, the woman who only speaks Hungarian and is only around for a month, captures Louie’s attention quickly, and they have a variation on a whirlwind romance. They learn to interact through gestures and expressions, but a post-coitus look from Amia admits that this was all temporary and just barely not enough. There was a simultaneous trueness and falseness to their time together, the barriers of speech rubbing up against something innate in their feelings for one another. Louie never diminishes what this must have meant to them both, but in Amia’s final note she says that this was something close to love, not that emotion itself. That fact does not make their closing stares any less honest, but it serves to answer the question that first episode posed.

In the end, when the hurricane arrived, there was only one place Louie could have found himself. It would have been horrific for him to abandon his children when the city was being submerged. But if that were the only point the show were trying to make, it could have easily placed them at his apartment. Lilly and Jane seem calm when he arrives, but Janet is in the throws of panic, and hugs him more powerfully than she likely has in over a decade. This may have been the story of Louie and Amia, but that is not who Louie choses in the climatic storm. His romantic love for Janet may be gone, but return to what the two say after leaving the therapists office. Their relationship has changed; being divorced parents has its ups and downs, same as a marriage.

So of course Louie winds up carrying Janet to safety. They have experienced greater challenges, but that means they know greater love. This is why Louie fears his children failing to experience the real world: the worst parts of life inform the best. Real relationships are not built from miscommunication and games of charades. The true stuff, the stuff that one drives through the storm that killed LeBron James (and twelve million others) for, must know struggle.

And the rain will stop. And the arguments will resume. And Jane wakes up. The dream is over. We face the storm, and search for a dog with four legs. And if one cannot be found, three legs will do.