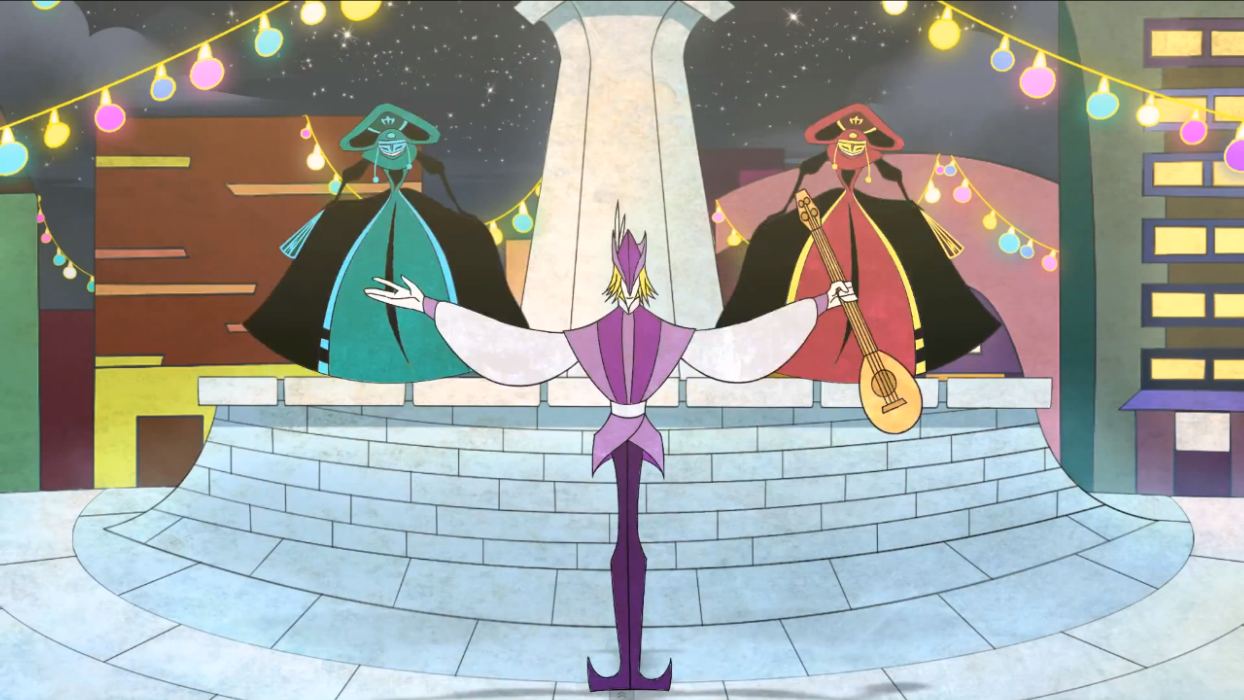 On the Town is a new column where I force myself to leave the apartment. This time I went to a short film festival with a focus on animation and music.

The silent film is reliant on score in a specific way; it becomes the dialogue to a certain extent. Music becomes the aural conduit to understand the piece of art, absent of any vocal cues. What the Scored Silent Film Festival, presented by BAWSY Animation at Chicago’s Crybaby Gallery, accomplished, above all, was utilizing the relationship between silent film and music to explore how each influences the other.

The theme of the night was animation, with a heavy emphasis on experimental, non-narrative pieces and a good deal of stop-motion. The films came from Chicago artists, many of which are just now leaving college. The accompanying music was provided live by local musicians. The room felt energized at first; given that it was a smaller event, many seemed to be friends and family of the animators, or those artists themselves. Though the program ran a bit too long, the pacing of the night moved quickly, with every music act scoring around five or six films a piece.

The films themselves ranged wildly in quality, as local film festival entries are wont to do, but overall the hand-drawn animations were lush and the stop-motion was effectively uneasy. CGI is trickier to pull off on a lower-budget, and that showed as always, though some, like Shelly Lio and Lihan Zhang’s “Malus” made up for that defect with cute storytelling and character design. Some of the more experimental pieces were obtuse to a fault, becoming unmemorable by virtue of their few distinguishing characteristics. The narrative films, even those with basic, nearly sentence-long plots were able to enhance the beauty of the image with a reason to care about it.

Beyond a simple showcase, the particulars of S2F2 made it a memorable night. The musicians only had a handful of days to prepare scores for the films, but this gave their interpretations a loose, organic quality that is often absent from more rehearsed pieces. This worked in some cases, like Moriokun’s harsh enhancement of Shawn Spear’s “Widow Motel”, elevating an already great piece to sublime horror. There was a bit too much noodling for some, and the music occasionally fell noticeably out of sync with the films. But when they worked in tandem both were enhanced; the music sounded richer as wordless dialogue and the films were given distinct, powerful moods.

This, perhaps, is the best thing a film’s score can do; enhance. The two don’t inherently create something new when put together, but by bringing out elements of one another the atmosphere grows into focus. This can be in the form of a punch-line, like Derek Allen’s wonderful discordant note when an orb hits the Chicago Theatre in Ryan Ruiz’s “TAG” (Disclaimer #1: Derek Allen is a friend of mine. Doesn’t stop him from being a terrific musician, but important to point out). Or, the score can be enlivened by the visuals; Anne Beal’s violin playing was beautiful, but her own, impressionistic short films were able to give the sounds more purpose than they had before. The Scored Silent Film Festival functioned as a showcase for local artists in the fields of animation and music, and proof that the two should be in conversation as much as possible.

5) “Glimpses” – Sharon Pak
My favorite film that almost completely lacked narrative, “Glimpses”, recalls Christoph and Wolfgang Lauenstein’s great short “Balance”, at least in terms of style and humanoid design. “Glimpses”, though, is more concerned with art than politics or social nature, featuring a figure who becomes of a piece with its camera and captures the world outside of the dark box wherein it resides.

4) “Park” – Gabrielle Bohr
Even in the cutest specials, Claymation has an offbeat, warped quality, with everything looking to be in the process of melting. This may be why the style often works best in the world of the grotesque, as Gabrielle Bohr shows with “Park”. The most impressive aspect of the work is how more disgusting objects become at a closer view, giving every aspect of the world a distorted feeling. The story here is slight, but amusing enough, with three worms eating their way into a sandwich and out of somewhere much darker.

3) “How I Became a Villain of Dirt” – Stuart Marsh and Molly McCandless
The festival featured the first two entries in the ongoing webseries, “How I Became a Villain of Dirt”, both of which wonderfuly use stop-motion animation to start building a unique world. The story begins in media res, showing the horrors that will eventually be released. Then we arrive at the beginning, but even in simpler times the love interest is walking around with her feet cut off. There’s a quirkiness here that nicely plays against the dystopian elements on display. The first two episodes can be be found here and here, respectively.

2) “Widow Motel” – Shawn Spear
“Widow Motel” uses the trappings of noir by way of Stephen King, eerily building up to a wicked ending straight out of a Hitchcock film. The animation is based around porcelain figurines, and the inherent innocent nature of dolls slams against the thrilling aspects of the story. Shawn Spear is able to elevate a standard lovers-in-peril tale by switching alliances numerous times in only a matter of minutes. Moriokun’s live score dug into the calmly supernatural nature, but this one stands well on its own, and can be watched here.

1) “Gorgeous” – Zige Zhang
Zige Zhang stunned with “Gorgeous” a film that truly lived up to its name. The story concerns a young girl bringing color to her town in the form of a sea-bound carnival, but that’s only important insomuch as it enriches the beautiful drawings that Zhang provides. Initially the town is blue, but once color arrives the world pops, capturing the whirlwind of new experiences. The style plays the sharp detail of anime against more simple, blocky backgrounds to bring out the distinction between the average and the poetic. “Gorgeous” can and should be found here.

“Battle Picante” – Hector Manuel Padilla
Disclaimer #2: I happen to know the person who made the best film of the night which means I don’t feel comfortable listing it, but rest assured it would sit atop at number one (and rest assured that I am not the only one who holds this opinion). “Battle Picante” is an absolute delight, perfectly striking colors and shades of grey or purple off of one another to give richness to this deceivingly simple world. The tale involves the quest for hot sauce, and the short journey climaxes with the appearance of the devil and his flame-mustache. The punchline at the end of the film is great, especially impressive in a field where so many struggle to provide endings that are both appropriate to the piece and hilarious. Padilla’s style combines the cultural influences of Scott Pilgrim with the whimsical silliness of Adventure Time to ultimately shape an artist’s voice that will hopefully be everywhere soon enough.
Posted by Wine and Pop at 2:25 PM

Email ThisBlogThis!Share to TwitterShare to FacebookShare to Pinterest
Labels: animation, On the Town, Short film