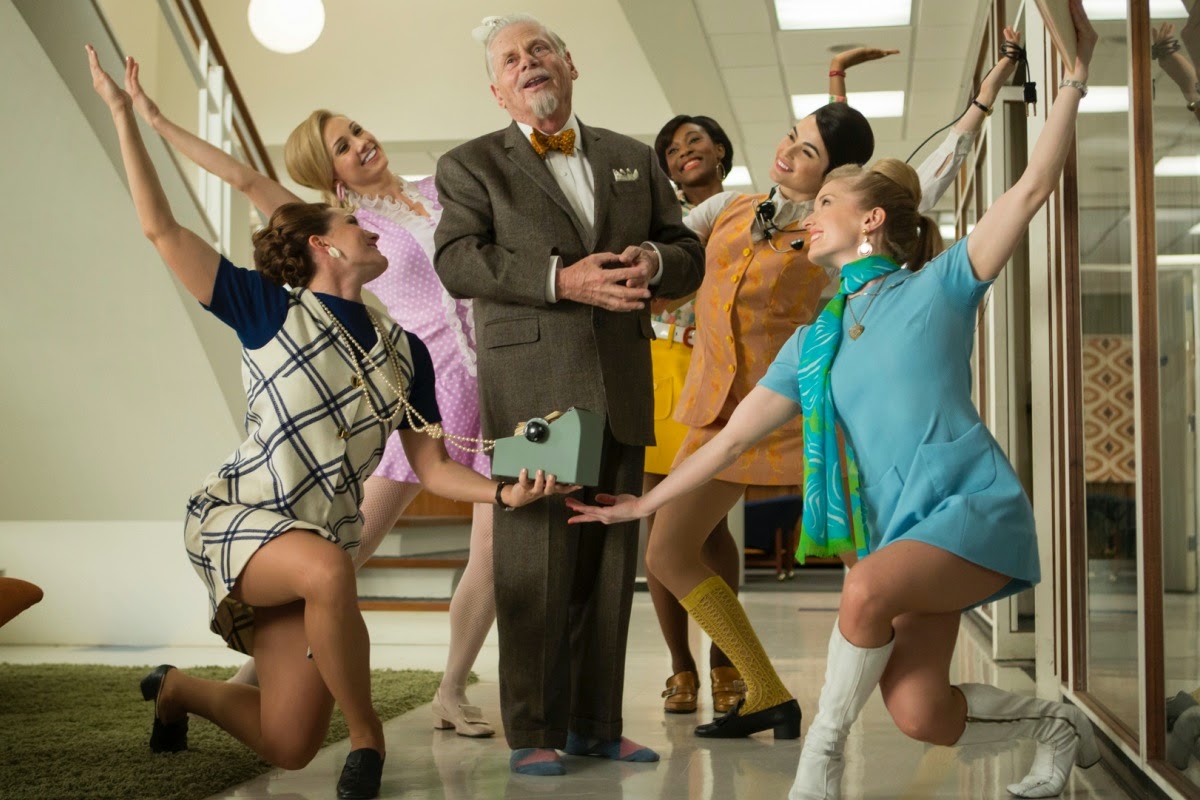 The following are my favorite television shows from the past year. Lists are in alphabetical order (Mad Men or Orange is the New Black would probably be my number one, but I didn’t feel the urge to rank this year). This has been yet another tremendous year for television, and an especially great one for animation. Without further ado, my picks for the best TV of 2014. 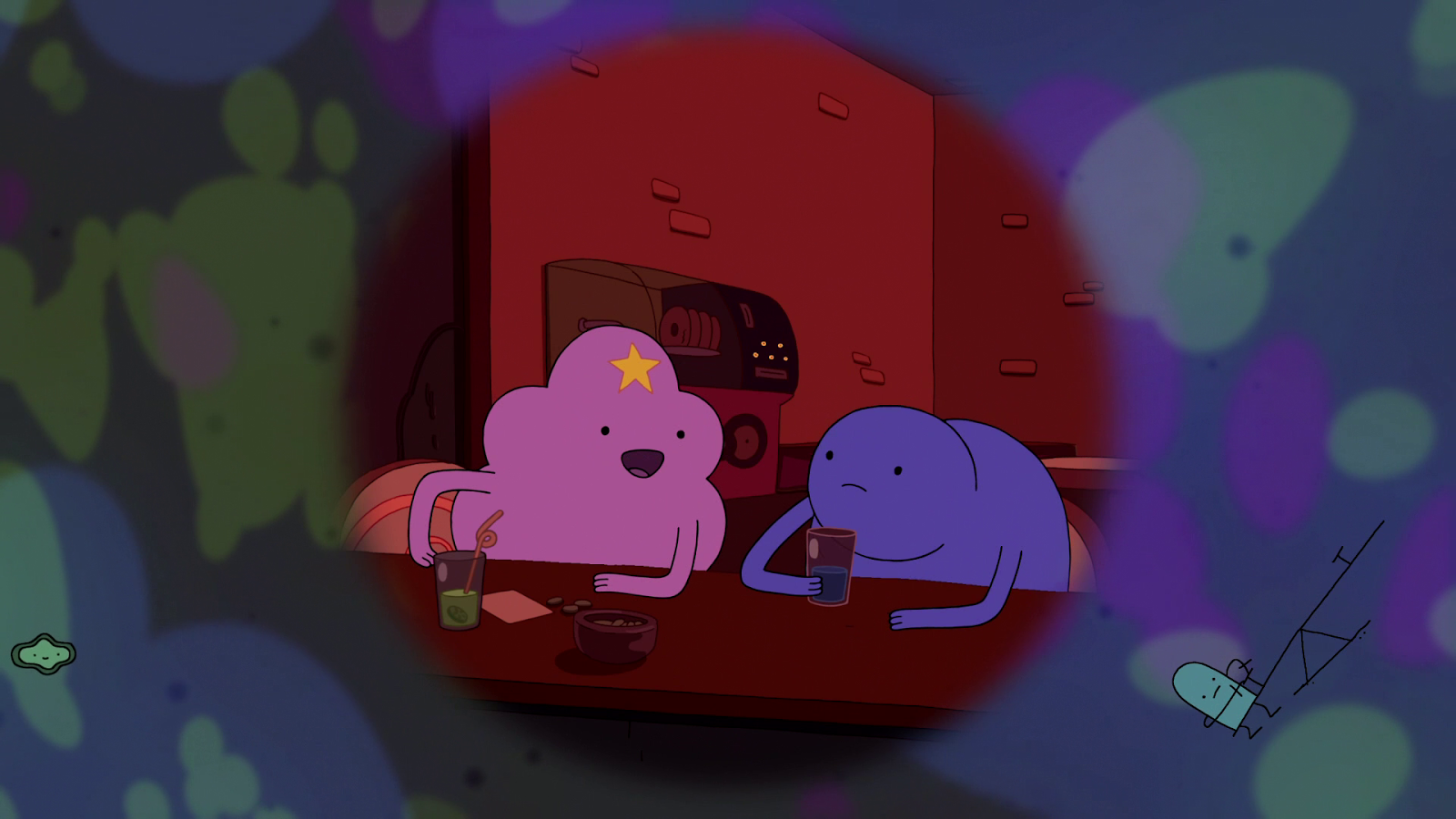 Adventure Time
In 2014, Adventure Time managed the impossible: it expanded both the scope and the depth of the show, burrowing into its two main characters while continuing to expand the world of Ooo and flesh out the multitude of supporting players. Jake faced parenthood, Finn encountered his father before losing him again, and the Ice King met a strange, wise man named Giuseppe. Beyond that, and the complex and powerful mythology the show continues to build, many of this year’s best episodes came from characters outside of the regulars. The epic tale of Lemonhope culminated in a head-twist both emotionally and narratively stirring; Shelby the worm was awarded his own sweet, short story. All of these individual stories would be great on their own, but the best thing about Adventure Time at the moment is how it weaves all of its disparate parts into a whole, filling a universe with developed characters, fascinating story-arcs and a quiet, beating heart.
Key Episode: “Bad Timing” 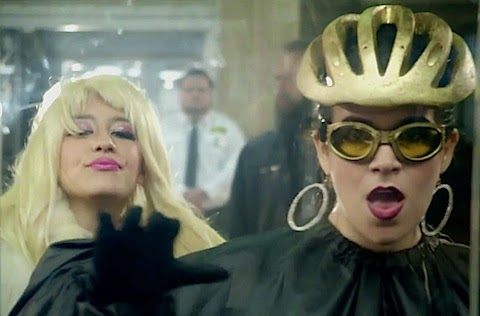 Broad City
There was no show in 2014 I watched more of than Broad City. Returning to the New York created by Ilana Glazer and Abbi Jacobson was always a welcome treat. The city, through their eyes, became less of a dream-fulfilling wonderland and yet retained the magical quality of something too expansive to understand. The funniest parts of the show featured the characters out of their limited elements, running up against ghastly improv shows and incompetent realtors. Their vision was always warped, but wisely centered on their strong friendship, one that nothing could truly break. This gave the vivid and strange encounters a human texture, placing the audience alongside the leads, or at least giving them enough to understand where the two were coming from. Absurd yet strangely authentic, Broad City presented a new comedic angle on being young and broke New York City, something that by now should feel like too-familiar territory.
Key Episode: “Apartment Hunters” 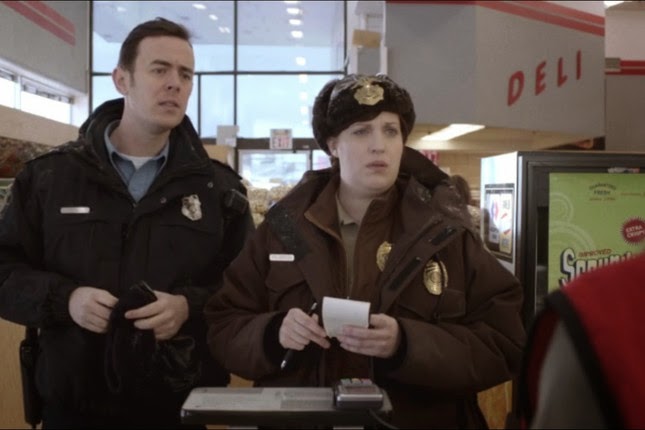 Fargo
It was fair to be wary of Fargo. An adaptation of one of the best films of the 90’s sounded both exhausting and unnecessary. Yet by deviating from its source material both story-wise and in theme, the television version of Fargo stands on its own as a great work of art. There were beautifully drawn relationships, vicious comedy and a winding plot worthy of the Coen brothers in its dependence on the sinful being punished unless they comically were not. The center of the show was Molly Solverson (Alison Tolman, in the year’s best TV performance), a deputy working unfairly hard to get anybody to give a damn about what she has to say. But the world around her was just as full, from Billy Bob Thorton’s wicked turn as the human incarnation of evil and temptation, to a funny and philosophical appearance from the two great comedians behind Key & Peele. By taking only what it needed from the film that inspired it, Fargo honored the past while trailing a grand new path forward.
Key Episode: “A Fox, a Rabbit and a Cabbage” 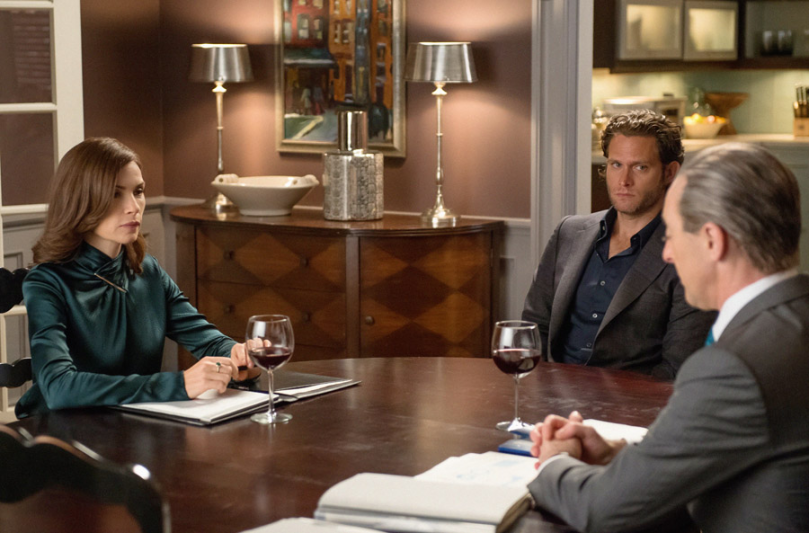 The Good Wife
At this point, qualifiers for the greatness of The Good Wife are both unnecessary and, frankly, a little insulting. This isn’t simply a great procedural or “good for network TV”. Good Wife stands amongst the best, laying a complicated moral world over hugely entertaining and quick-paced cases-of-the-week. After the departure of a main character, the show delved into the complexities of grief, constantly aware of how the past lingers over everything that comes after. The new season has been just as good as the acclaimed previous one, continuing to twist its narrative while retaining what makes the power and character dynamics so fascinating. As Alicia (Julianna Margulies, stunning and quietly graceful as ever) enters the race for State’s Attorney, the show looks to be finally facing the question of the character’s morality head-on. There likely won’t be a clear-cut answer to the query, but watching her struggle to maintain her humanity (in the face of every reason not to) has always been magnificent, and looks to continue that trend through to the end.
Key Episode: “Oppo Research” Gravity Falls
After taking a year-long hiatus, Gravity Falls returned as a defender to the throne of best kid’s entertainment. But there’s no reason to argue the merits of one over the other when both this and Adventure Time continue to grow as greatly as they have. Falls’ continues to find authentic emotional beats underneath vivid and fun storytelling, from the story of Soos growing tragic in “Blendin’s Game” to Mabel’s continuing heartbreak in “Sock Opera”. The mythology of the show remains an intricate puzzle to be solved by the most dedicated fans, but beyond the reveals stands a town full of characters worthy of Springfield, and their dedicated growth necessary for the show to continue on. The second season’s best outing has been “Into the Bunker”, an episode that finally confronted Dipper’s infatuation with Wendy with a maturity that eludes most shows aimed at adults. If I were able to get my hand on Blendin’s time machine, I’d gift this show to myself as a kid. Though something this funny, inventive and emotionally sophisticated belongs to everyone, whether you’re a child now, or only in the past.
Key Episode: “Into the Bunker” 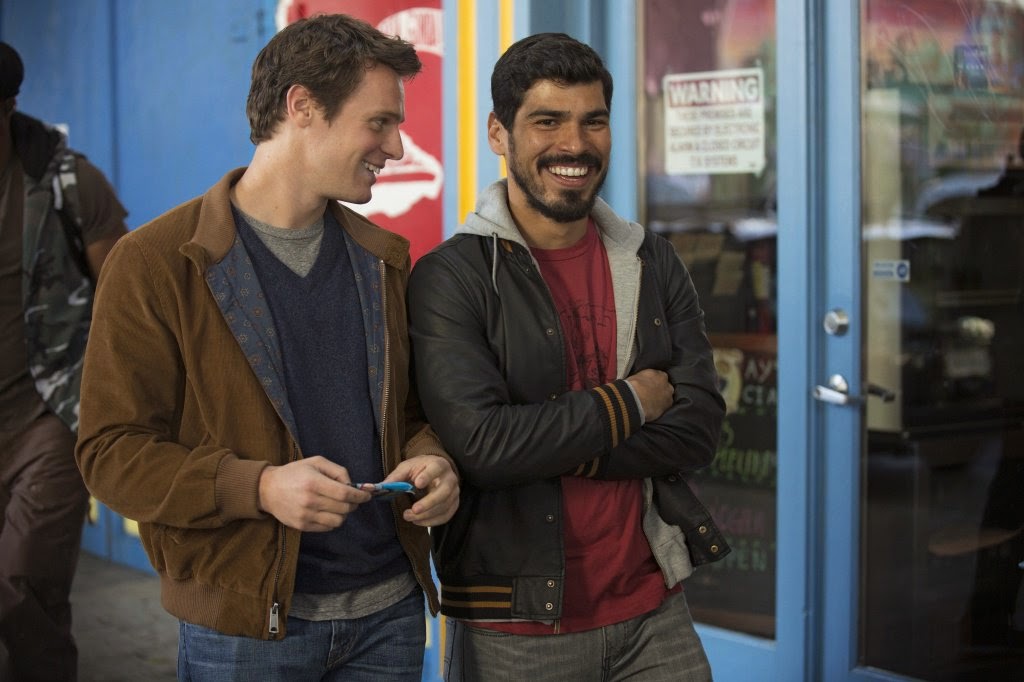 Looking
Touchingly subdued, while still managing to find electricity in small moments, Looking is the story a group of gay men living in modern-day San Francisco. Nothing much happens to them beyond gentle foibles and loving conversations, yet the show manages to pack as much emotion as tension into an episode as anything else on television. This technique is most profound in the Before Sunrise-esque “Looking for the Future”, a beautiful episode that documents the honeymoon period of a relationship; the yearn to know everything about your new partner coupled with purposeful ignorance of what troubles may be ahead. The season as a whole captures the various characters at different points in their lives, never leaning on easy plot conveniences or contrived scenerios. Everything in Looking feels achingly real, granting it a poignancy most shows can only dream of.
Key Episode: “Looking for the Future” 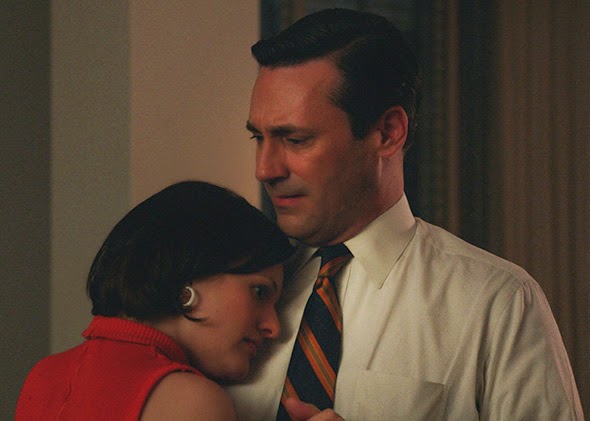 Mad Men
As Mad Men began its final stretch of episodes, it burrowed into the year of 1969; the end of an era, and that era personified in the man of Don Draper. This was expected; what was more daring, especially for a drama of this ilk, was to offer a glace of redemption and hope. Don spends the season slowly rebuilding the torn relationships in his life, from his estranged parenthood of Sally to the previously shattered bond between himself and Peggy Olson. Providing proof of this slight strand of optimism was the image of the various characters watching the moon landing; a country looking forward, and the man quite possibly following suite. The first half of Mad Men’s final season did have plenty of gutting threads (Michael Ginsberg’s descent into madness chief among them), but for the first time found something else poking through. Rather than this being dismissive of the characters’ pasts, it’s worked to add another complex emotional layer to a show that should rightly sit among the best ever produced.
Key Episode: “Waterloo” 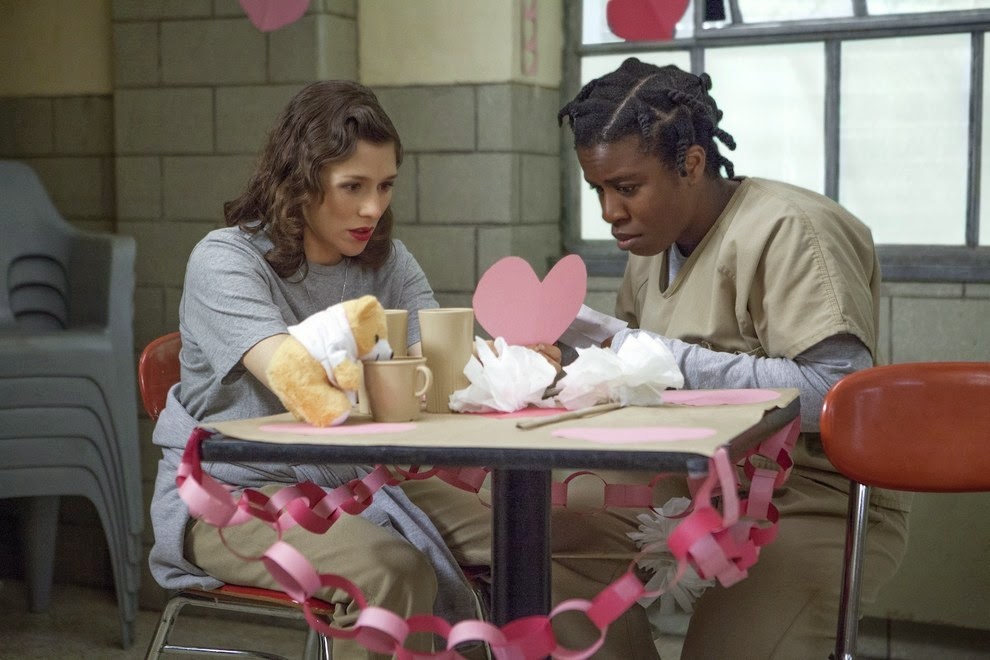 Orange is the New Black
As I wrote when the season premiered on Netflix, Orange is the New Black is the most empathetic series currently in production. But it bears repeating. In a year filled with news that continually proves how much people in positions of power must look outside of themselves, and attempt to understand the hardships of others, here was a show exemplifying both that theme and reaching out that welcoming hand. Even outside the context of this particular time in history, the lesson and the show would still be vital. All of the characters in this world are drawn with a level of complete understanding, no matter where they fall on the moral scale. This season specifically dug into the pains faced by aging women, who are often stripped of the agency they already worked so hard to gain. These large themes worked in tandem with small, observed moments, the best of which comes late in “You Also Have a Pizza”. One character, often maligned for her assumed insanity, comforts another. The two haven’t had much interaction before, but given how vividly they appear onscreen, their relationship is already fully understood. No show in 2014 was more understanding than Orange is the New Black, something each artistic work, and person, should aspire to be.
Key Episode: “You Also Have a Pizza” 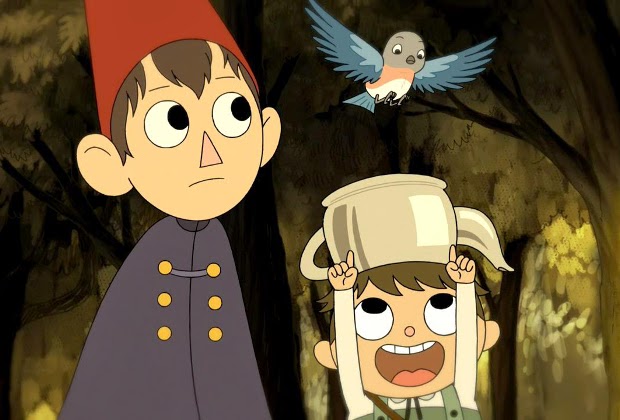 Over the Garden Wall
Over the Garden Wall takes awhile to fully reveal itself. This is somewhat ironic, given that the animated miniseries runs under two hours in total. But even before the depth of the show is exposed, the fresh spin on fairy tales is immensely enjoyable and strikingly beautiful. Then, “Into the Unknown”, the series’ penultimate episode, provides a context for the events, plunging the show further into a unique identity. The turns are too perfectly doled out to be revealed here, but given how short Garden Wall is, there’s virtually no reason not to give it a try. And when you do, you’ll likely find a complex look at growing up and the relationships that morph along the way. If nothing else, the young Greg (voiced by Collin Dean) is one of the great new comic creations of this animated golden age.
Key Episode: “Into the Unknown” 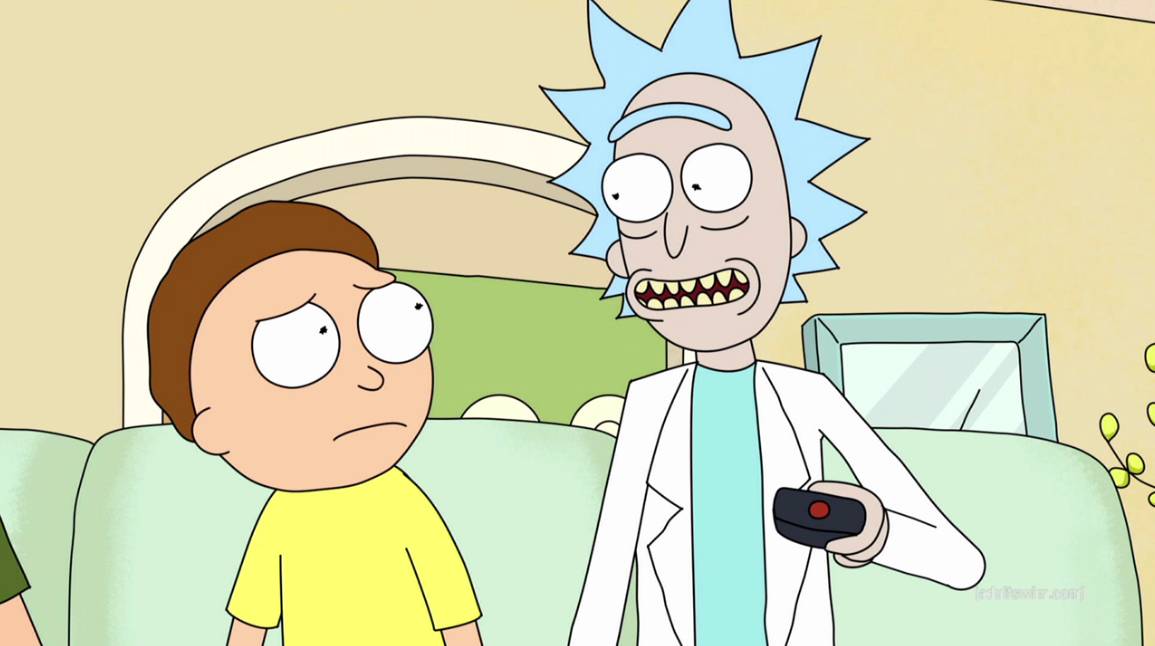 Rick & Morty
While one of Dan Harmon’s creations has been dragged through years of turmoil, he and Justin Roiland created Rick & Morty, a bizarre and hysterical animated series on Adult Swim. A number of Community’s pieces are strewn about the show, namely the ability to incorporate pop culture without being contrived or lazy. But this was a creation all its own, a mutated riff on Back to the Future that featured horrifying creatures and crackling non-sequiturs. The voice acting lent an air of improv, though the characters were intelligently developed and the worlds explored were fully conceived. In the year’s best episode of television, “Rixty Minutes”, the show touched on serialized storytelling, paying off the emotional ending of one episode into a line that defines Harmon’s artistic outlook, Rick & Morty’s mindset, and the view of many young, jaded people today: “Nobody exists on purpose. Nobody belongs anywhere. Everybody’s gonna die. Come watch TV.” That meld of mild existentialism with absurd plotting made Rick & Morty more than a distraction from those plain and painful truths: this is a show to be cherished.
Key Episode: “Rixty Minutes” 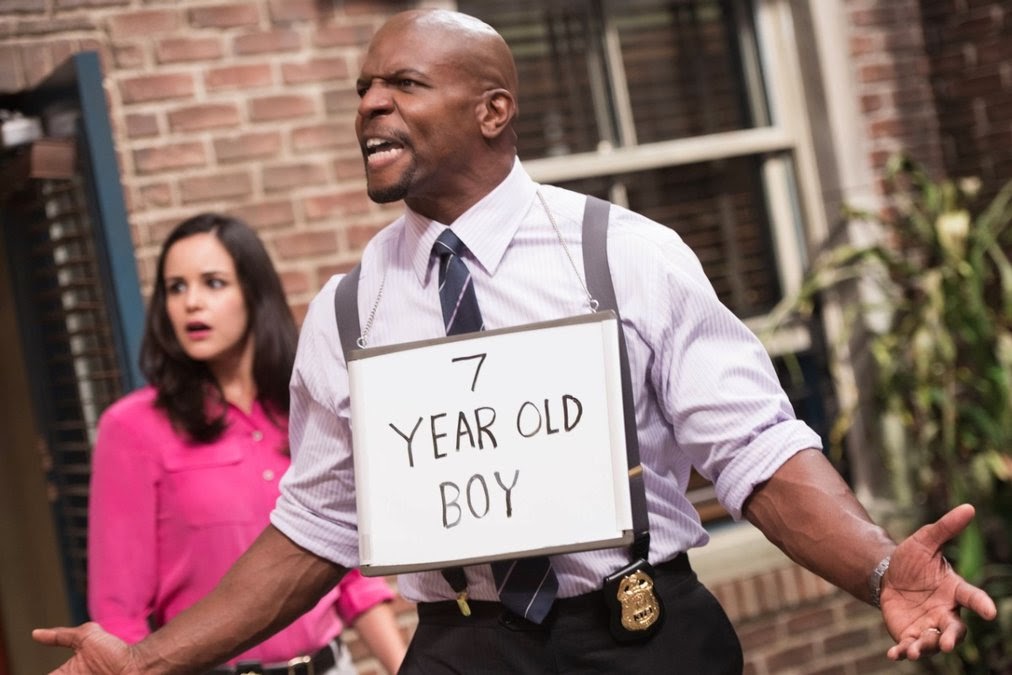 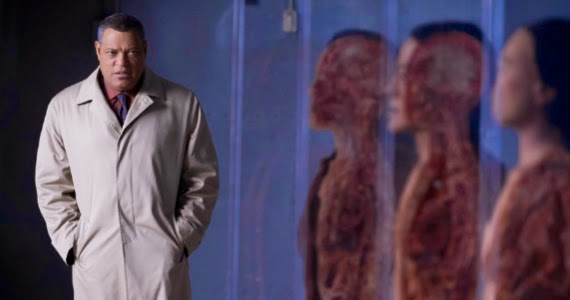 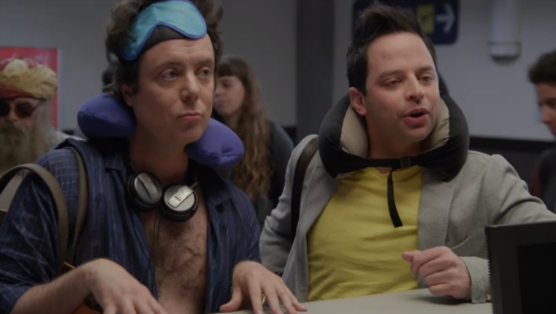