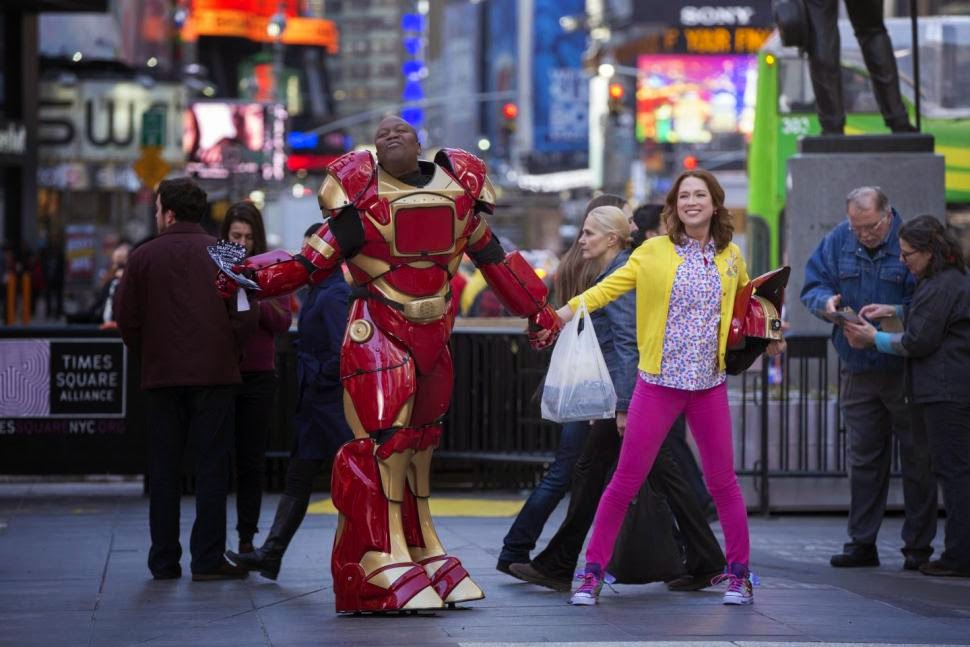 Unbreakable Kimmy Schmidt, the new sitcom from Tina Fey & Robert Carlock debuting today on Netflix, resembles some of the best shows of the last decade while managing to carve out its own unique identity. Fey & Carlock also created 30 ROCK, a show that Kimmy Schmidt vividly recalls from its comic sensibility to a similar bouncy score. But even if the exterior most closely resembles that program, its heart, mentality and ethos brings to mind another NBC Thursday night sitcom (hey, remember those?).

Parks & Recreation, which recently left the television landscape a little darker and sadder, had a sense of humor more aligned with its forefather, The Office. The jokes were mostly dug out of the characters bouncing off each other, scattered with the gags and brashness that 30 ROCK and Kimmy Schmidt both claim. But, as the numerous articles Parks & Rec’s finale left in its wake pointed out, that show was warm and optimistic. Yes the townspeople were fools and the world could be overbearing, but Leslie Knope and her friends were able to burst through anything thrown their way. That ideology is much more in line with Kimmy Schmidt than the often bitter and detached 30 ROCK.

At the center of the comparison is the fact that Kimmy is more of a Leslie Knope than a Liz Lemon. She comes from a more troubled background, having been kidnapped and held in a bunker for fifteen years. But her confidence and optimism are just as oppressive as Knope’s. She radiates the belief that anything can be overcome, hence the show’s name, and refuses to let the fools that surround her stand in her way. Though she’s more naïve than Knope, she doesn’t let that affect her strength in the face of adversity. The characters are far from carbon copies, partially due to the performances that created them. Amy Poehler brought a knowingness to Knope that played against any mistakes she made. Ellie Kemper, in the role of Kimmy Schmidt, is more wide-eyed and less positive about the little things like math or getting into strange men’s trunks. But, just like Knope, she’s confident about the big things, the stuff that matters, like being there for loved ones or standing up for oneself. Kemper is brilliant here, carving out the cloth of characters who came before her to create a new person wholly worth investing in.

The world around Kimmy resembles Parks & Rec in other ways. This is especially apparent late in the season, when the character returns to her hometown, which just so happens to be in Indiana (you’ll know you’re there when you pass the third water park). That town, like Pawnee, is filled with buffoons having that fascinating paradox of being easily swayed and wildly stubborn. Yet their simplemindedness is just another hurdle for Kimmy to clear, one that shows how much she’s grown in her time post-captivity (there’s a perfectly valid argument to made that both this show and Parks condescends to small-town communities, but Schmidt pokes fun at most everyone’s expense).

Both shows also share a feminist bent, one sorely needed in the television landscape. In its final season, Parks & Rec had a wonderful episode dedicated to dismantling the stupidity behind “Men’s Rights Activists” culminating in the already-classic line “you’re ridiculous and men’s rights is nothing”. But the show was sharply feminist in subtler ways as well, supporting female characters without making them rely on men as crutches. Kimmy Schmidt goes a step further, as the men take a backseat to the women, and one episode (“Kimmy Rides a Bike!”) is entirely devoted to tearing down and ridiculing the patriarchy. If I’m recalling correctly, there’s not a single straight white man on the show who isn’t made to be an absolute fool or villain. There’s a chance I’ve missed out on something, but that seems exceedingly rare. The final episode hinges on the connection between women who both literally and figuratively support each other in a climactic scene. Unbreakable Kimmy Schmidt does feature love interests (though the main one is an Asian man, something still rare in pop culture) but doesn’t rely on them the way shows often do. This is, first and foremost, a show about a woman empowering herself after being literally trapped by a man for over a decade.

Perhaps the biggest similarity between the show that recently left us and the one we recently gained is the warmth and generosity that underlies all of the above points. As previously mentioned, the final episode of Kimmy Schmidt’s first season depends on connection and care, overcoming the perils of the past to fight together. Kimmy’s friendship with her roommate Titus (the fantastically expressive Tituss Burgess) is one built on mutual admiration. Titus occasionally slips (namely in one hysterical bit where he attempts to support her but keeps saying the wrong thing), but he’s ultimately there for her from the beginning. This may sound simple, but the network of support that flows through this show is difficult to pull off without becoming saccharine, something both Kimmy Schmidt and Parks & Rec know how to avoid. They aren’t the same show by a long-shot, and nothing can truly fill the void left by Parks & Recreation, but this comes awfully close. By knowing when to show its heart and knowing how to conquer the patriarchy, Unbreakable Kimmy Schmidt builds on the successes of the past. Characters worth rooting for at the center of great television shows can often seem in short supply, but Kimmy hilariously and profoundly enters the canon. She’s more than unbreakable, she’s building something new.
Posted by Wine and Pop at 5:14 PM