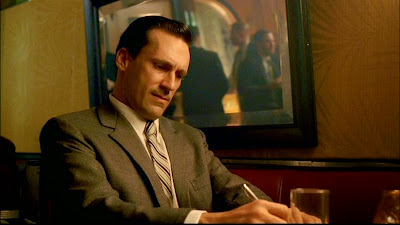 “What you call love was invented by guys like me to sell nylons.”

Mad Men, as with any show, is compromised of more than any one hour, even its last. But the final moments are guaranteed to spark severe reactions. Bookends provide a guide, in art and in life, to the rest of the story. Endings can be disappointing when they don’t finish the thought the viewer believed the artist had started, or when one sees those last words as muddled or incoherent. Of course, as with anything genuine, the ending doesn’t truly define the whole. It simply lingers, like the aftertaste of a drink. All that being said, I believe that Don found peace. But even that happiness can be bottled and sold.

In the show’s first hour, “Smoke Gets in Your Eyes”, Don Draper tells Rachel Menken the above quote, belittling her belief in happy endings. Yet his journey in the finale, “Person to Person”, delivers him to a seemingly content conclusion, a smile on his face purged of the sins of his past. Or, at least, purged for the moment. Perhaps Don falls prey to the traps of the past, but the show leaves no hints if so. As soon as that smile appears a song begins. Many have interpreted the use of a Coca-Cola ad as proof that Don returns to his old world. But I think creator Matthew Weiner’s intent with the commercial is more thematic than directly narrative.

The proof, to me, lies in the fact that every other character was sent away happily. Pete, reunited with his family, is off to a new job in a new place however foreboding his mode of transportation may be. Joan has begun her own company, working out of a small room like SCDP once did. Roger and Peggy have both found relationships that, while far from perfect, resonate in the moment. Peggy’s admission of love in particular was gushingly raw and cheesy and beautiful in a way the show has never dared to be before. Yes, all of these threads hold potential for ruin, but Weiner chose to end on the joy. Happiness, as with all things, is easily combustible, but there are no signs offered in those last moments that disaster is imminent. Matthew Weiner believes in catharsis for the individual. He simply holds contempt for the society that surrounds them.

What the “I’d Like to Buy the World a Coke” ad represents is not Don’s return, but something closer to his own words in the series premiere. Don has detached himself from anything authentic, believing that everything from love to belief was a lie that it was his job to market. Flashbacks gave a grounding to that outlook, and his repetitious behavior showed how difficult that cynicism can be to break. And in the final scene, as Don meditates and empties his mind after hugging a complete stranger and crying in front of a crowd, that cynicism breaks. But Don is not Weiner, and the latter sees what the hippie outlook of love and acceptance will become: another goddamned commercial. A nice ad, a catchy one that has persisted through the decades. But a commodified representation of a true emotion nevertheless. The show brought Don Draper to the point where he was able to buy into what he had been selling. That may be depressing, but it’s more complicated than that (as nearly everything always has been on this show). Don now believes in love, nylons be damned.

It makes sense that Weiner ends with a spirit of uplift for the individuals he created. No matter how many times he shredded Don and built him back up, he never seemed to hold contempt for these characters. Some have accused the writer over the years of withholding what the audience desired, but a man incapable of that could not create an episode like “Shut the Door. Have a Seat.” That was an hour pulsating with hope and forward momentum. Yes, the new business led to suicide and a buyout and all matters of existential dread. But that doesn’t take away from Roy Orbison’s warbling look at the future that closed that third season out. Happiness need not be eternal to be true. That’s the thing about endings: nobody really likes them. As another former love once told Don, “you only like the beginning of things.” So with his end, Matthew Weiner knew that the characters would go on, and said only this. For now, there is joy. The rest will come, and everything will be up for sale. But for now, there is joy.
Posted by Wine and Pop at 11:34 PM